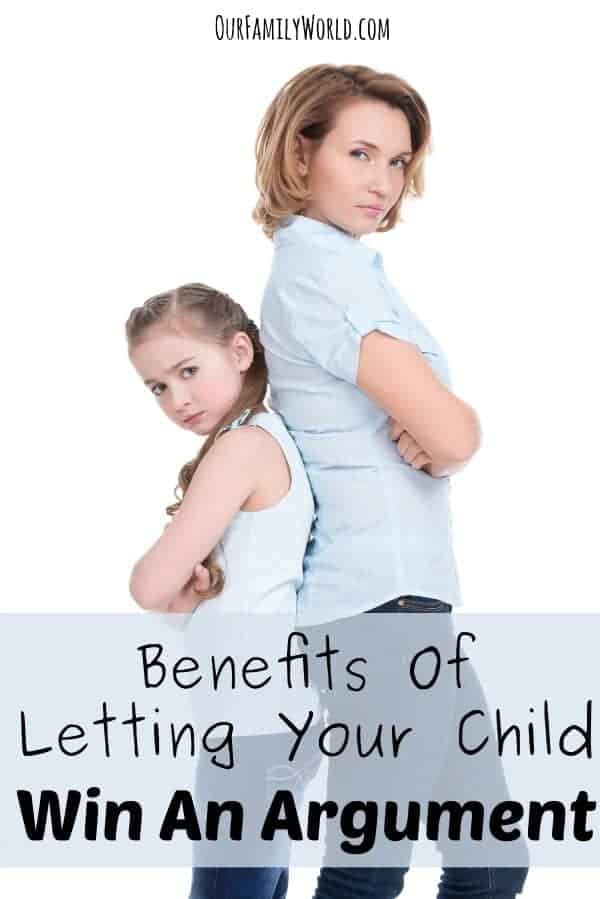 You may think that this is against everything you have ever believed as a parent, but let us explain to you what are the Benefits Of Letting Your Child Win An Argument.  Not only will we be helping you learn how to successful let them win, but also how to do so without truly losing in the exchange.  Arguments don’t have to be volatile situations.  They can simply be disagreements that you allow your child to talk through and win.

BENEFITS OF LETTING YOUR CHILD WIN AN ARGUMENT

What are the benefits?

When should I let them win?

A great example of an argument you should allow your child to win, is when you are dealing with a picky eater. While you don’t want to give them control over every little thing in their life, you do want them to feel like they are respected and valued.  When they refuse eating the broccoli at dinner and you demand they eat their vegetables, you could lead the argument away from specifics and into the direction of “what vegetable would you eat”.  Allowing them to win the argument of broccoli, but choose a different more savory for them vegetable would be a perfect opportunity.

When should I not let them win?

The benefits to letting your child win an argument are many.  Using this as a chance to parent in a way that shows them how to debate on a mature level instead of just as a way to get their way is a perfect way to help them grow.  Parenting choices are made every day and can be so tough to know how to deal with.  Spending the time to teach your children how debate and arguments don’t have to be bad things will help them have successful business and personal relationships n the future .

9 thoughts on “Benefits Of Letting Your Child Win An Argument”