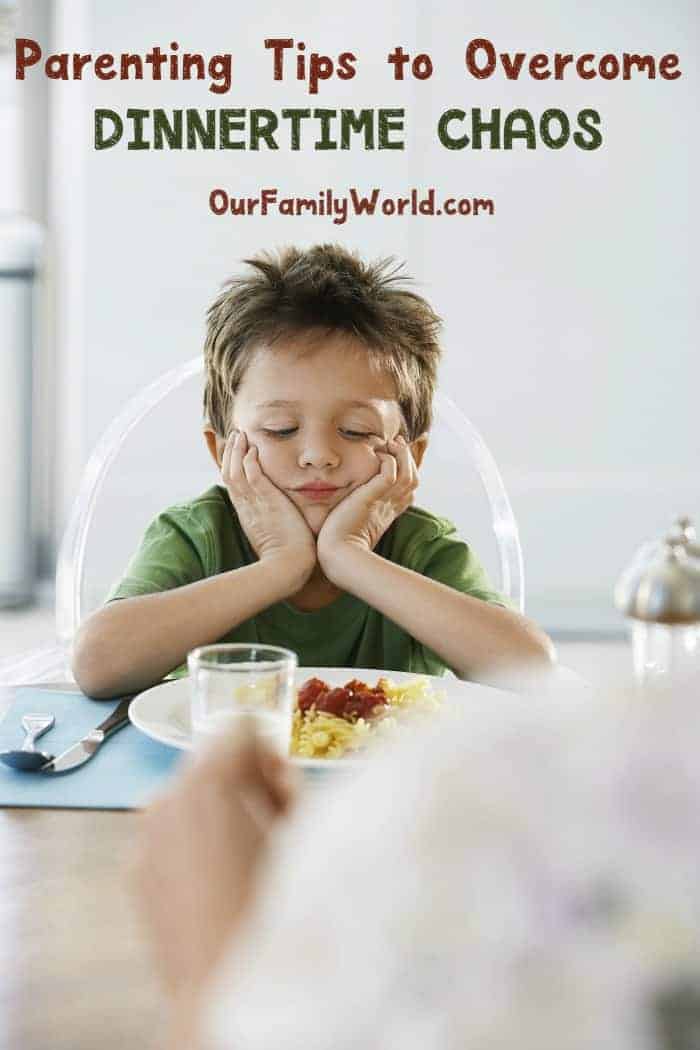 Finding ways for how to overcome dinnertime chaos can seem like an impossible feat when you’re exhausted from parenting and your little ones are giving you a hard time. It’s especially difficult when you think about how excited you once were to actually be able to have those family dinners! When my son was a baby, I was beyond excited for him to start eating solid food.  After introducing him to rice cereal, I went crazy making all kinds of purees for him to try.  I came up with lots of different combinations of food, and he loved it all – I’m most proud of my avocado and fish puree, and my lentil and zucchini medley which he ate with gusto (and which were frankly rather unappetizing).

Related->Everything You Need to Make Your Own Healthy Baby Food

When he was a toddler, he tried anything I put on his plate: pot roast; spaghetti squash; chicken pot pie…  There is video proof of him eating spaghetti with meat sauce when he was just about two years old, saying “Good, good supper!”.  I was so proud (and maybe even a little smug)!  My son was such a great eater, eating a varied diet of whatever foods we put in front of him!

And then he turned three, and he became the Pickiest Eater In The World. Fast forward to September 2016, and my son is almost four years old and every meal has become a sort of struggle, a battle of wills on both of our parts.  Here are the challenges that I face with my son’s meals, and how I deal with dinnertime chaos.

Parenting Tips for How to Overcome Dinnertime Chaos

We’ve all heard this one, and I do wonder if it will ever stop being grating.  He’d be hungry if it was a meal of Goldfish crackers, but because it’s a beef stir fry, he’s lost his appetite.  I leave the meal on the table until he is hungry, even if he asks me for other things.  He sometimes eats a few bites of supper right before we put him to bed, simply because he can’t hold out anymore and is starving.  But I won’t give in and let him have what he wants…although it is HARD!

Mind boggling, since the majority of the time the food has never even touched my son’s lips, so he has no idea what it even tastes like!  I’ve tried reasoning, and I’ve tried to bribe him, neither of which work.  I remind myself that with his father and I as his parents, there will come a time when he’ll eat anything and everything – probably in enormous quantities!  And I tell my son that if he doesn’t like it, he doesn’t have to eat it.  But he is not getting anything else.

If at first you don’t succeed…

It sounds like such a cliche, but it’s true.  I have to introduce new foods to my son many times before he’ll even try a tiny little bite.  But I keep trying, because as much as I know he’d be happy to subsist on a diet of bagels and yogurt tubes, I really love cooking.  And, SURPRISE!  I really like cooking food that I enjoy too!

From going to the grocery store, to getting things ready for a meal, there are so many ways that you can get your children interested in the meal you are about to eat.  Even if it’s as simple as having your child add the flour to the counter before you roll out the pizza dough.  Children get excited to help, and it’s awesome see them beam and say: “Daddy, I helped make this!”.

As frustrating as mealtimes can be for parents, it’s important to remember that our kids will not starve… they are often just testing their boundaries!  Rather than bribing our kids to eat, let’s remember that family mealtime should be as pleasant and stress-free as possible. Our children will adopt the same attitude towards sitting down for meals as what we have, so if we try to keep it as relaxed as possible, our kids are so much more likely to maintain a healthy way of eating throughout their lives!

Do you have any great tips for how to overcome dinnertime chaos? Share in the comments!