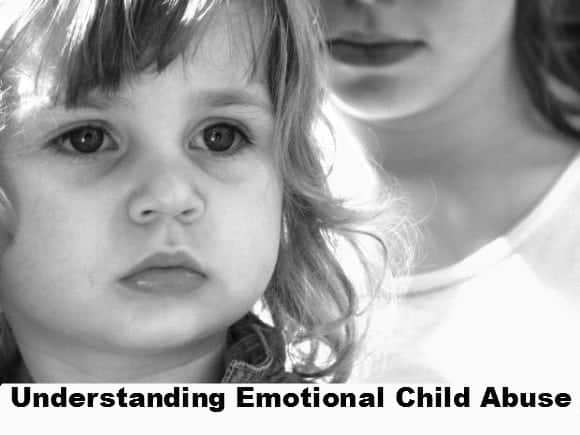 April is Child Abuse Awareness month, but it’s such an important topic that it should be discussed year round. When many people think of child abuse, they tend to think of children getting physically abused in some way. Sadly, there are many children who suffer through emotional child abuse as well. The only difference in terms of the overall effect on the child is that those who deal with emotional child abuse tend to carry their wounds on the inside. Stopping child abuse requires vigilance on the part of everyone who interacts with a child, from parents to teachers to neighbors.

What is Emotional Child Abuse?

Other less obvious forms of emotional child abuse include:

The effects of emotional child abuse on a child

Emotional child abuse can cut very deeply into a child’s psyche. It can also cause long-lasting effects that may carry over into the next generation. Many child abusers were abused themselves. This creates a chain that is difficult to break. Short-term effects can include difficulty concentrating in school, constant fear and anxiety, depression, and low self-esteem. Children who are bullied at home are also likely to become bullies themselves.

In the long run, it can lead to many other severe issues. These can include an inability to display emotions towards other and  lack of empathy. It may also lead to animal abuse. In some cases, it can cause psychotic behavior. While not all emotionally abused children grow up to become serial killers, a large portion of violent criminals have suffered either physical or emotional abuse as children.

Sadly, when it comes to putting a stop to emotional child abuse, the authorities often have their hands tied. Even those who work in child protective services admit that they don’t often go after cases involving emotional abuse because they simply can’t prove it. When a child shows up with broken bones, bruises, burn marks, and cuts on their body, it’s easier to prove that the child is being abused. Emotional child abuse doesn’t leave behind any physical evidence. Many child protection agencies simply do not have the resources to embark on a long trial to prove the parent’s guilt. School counselors and other professionals who have the opportunity to observe the child up close over a period of time can be helpful in recognizing such abuse. Again,though,  proving it to someone with the authority to remove the child from their threatening environment is a challenge.

This doesn’t mean that we shouldn’t all be vigilant and at least attempt to step in when we see a child being emotionally abused. It just means that our work will be a little harder! A child’s future is at stake, though. It’s worth it to stand up and fight.