This post on summer safety tips may contain affiliate links to help you find products to protect against tick bites. 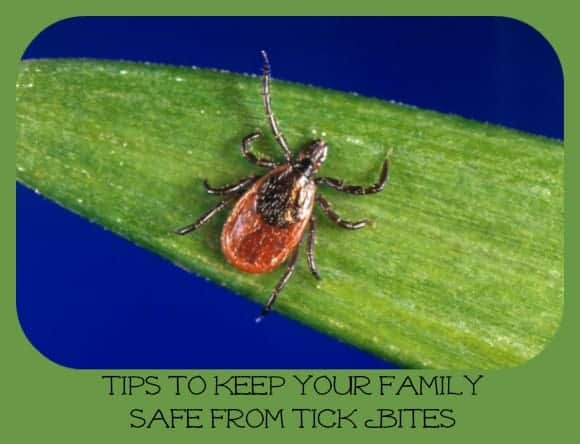 Did you know that tick bites are second only to mosquito bites when it comes to spreading diseases? Think about it, the little arthropod spends its entire life drinking the blood of other animals and people. Of course it is going to have all sorts of nasty toxins in its saliva! Obviously, avoiding tick bites in the first place is the best way to avoid getting sick, but it’s also important to know what to do if you do find a tick on you. Following these summer safety tips for dealing with tick bites can help keep your family healthier in the long run.

Before getting into the summer safety tips to avoid tick bites, it’s important to understand exactly why it’s so important to keep these nasty critters away from your family. Ticks carry a number of different diseases. Some vary depending on the region of the world they’re found in and the type of tick that bites you. The majority of the diseases are treated with antibiotics. . Unfortunately, the CDC is reporting a nationwide shortage of doxycycline, the antibiotic that works best against these disease. Following basic summer safety tips to prevent tick bites is more important than ever right now.

Lyme disease– Just about everyone has heard of this disease associated with tick bites! It is caused by blacklegged species of ticks, such as deer ticks. It is often characterized by a bulls eye rash surrounding the area of the tick bite. Symptoms include fever, fatigue and headache. It is important to get treatment right away, as Lyme disease can spread into the joints and nervous system. Treatment usually involves taking antibiotics for several weeksLyme disease is most common in the Northeastern parts of the United States as well as some of the Great Lakes regions. Health Canada reports that Lyme disease is increasing in some Canadian regions as well, particularly British Columbia.

Anaplasmosis- Also caused by blacklegged ticks, anaplasmosis can be fatal if left untreated. Symptoms typically begin about a week or two after the tick bite appears. Symptoms can range from fever and headaches to chills, vomiting and confusion. Rashes are rare with anaplasmosis, so you don’t get a warning like you do with Lyme disease. While the fatality rate is less than 1 percent, it is vital to get treatment as soon as possible to avoid major complication. Worst case scenarios include hemorrhaging and kidney failure. Anaplasmosis is most common along the East Coast and in the Mid-West.

Ehrlichiosis- Those living in the southeastern and south-central part of the United States need to follow summer safety tips to avoid the nasty Lonestar tick! This critter can carry the potentially fatal ehrlichiosis. Symptoms vary, but may include fever, headache, chills, a general feeling of fatigue, nausea and vomiting. It can also cause conjunctivitis (more commonly known as pink eye). Rash can occur, although this is more common in children.

Rocky Mountain Spotted Fever- Despite the name, this serious illness doesn’t just occur in the Rocky Mountain regions. In fact, it can be found in just about every state and throughout parts of Canada and Mexico. The disease typically begins within two weeks after the tick bite and can be difficult to diagnose at first. Symptoms may include rash, fever, vomiting, abdominal pain similar to appendicitis and lack of appetite. When treated early, Rocky Mountain spotted fever typically resolves without complications. If left untreated, it can be fatal.

Following summer safety tips to avoid tick bites in the first place is the best way to keep your family safe. While these tips are helpful year round, ticks are out in full force from April through September.

Following these summer safety tips to avoid tick bites can help keep your family safer, but they’re not a guarantee that you will never get bitten by a tick. If you do find a tick on your body or that of your child’s, remove it promptly. The best way to remove a tick is to grasp it as close to the head as possible with a pair of tweezers. Gently remove the tick and keep it in a container. Put the container in the freezer to save in case your doctor needs to see it. Keep an eye out for symptoms of tick-related diseases and contact your doctor right away if you notice any of the signs.