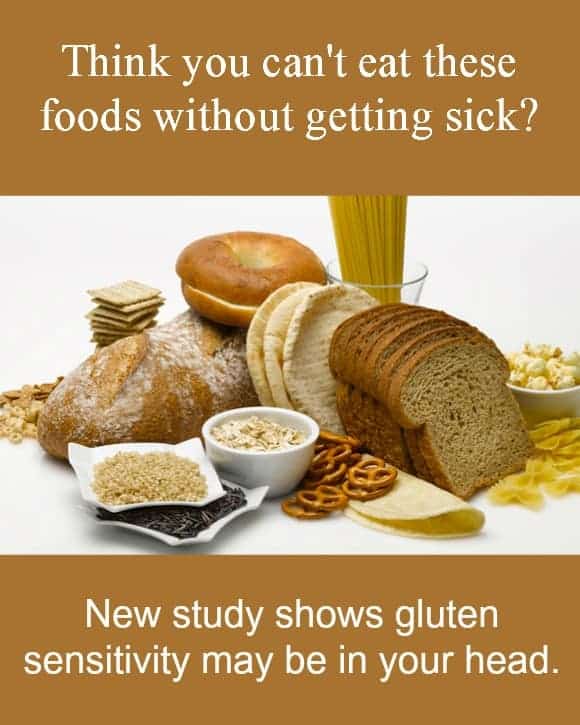 Gluten free or “GF” is all the rage right now. Gluten is a protein that can be found in grains such as wheat and barley, as well as being used as a meat substitute. It used to be that only people with celiac disease (about 1 million Americans suffer from this auto-immune disorder) suffered from a sensitivity to gluten. Lately, everyone seems to be going gluten free. It’s become very lucrative, with the gluten free market expected to hit $15 billion in profits by 2016! But does non-celiac gluten sensitivity actually exist?

A new study on gluten sensitivity just came out this past month. It was done by the same researchers who found that diets containing gluten could cause gastrointestinal problems in people without celiac disease back in 2011. They were surprised by the result and explored the problem further by doing a follow-up study in 2013.

The 2013 study was published in the journal of Gastroenterology. “In contrast to our first study…we could find absolutely no specific response to gluten,” said researcher Peter Gibson at Monash University. Participants were people who had self-diagnosed as having non-celiac gluten sensitivity. They were given three different diets in a blind test: a high gluten, low gluten, and no gluten (placebo) diet. All diets caused so-called gluten sensitivity symptoms in the participants, even the one with no gluten at all!

This latest study, the third as well as larger one, had the same findings as the second study. The researchers claim that gastrointestinal problems people blame on gluten sensitivity is likely caused by FODMAPs (including carbohydrates, disaccharides, monosaccharides, and related alcohols). These FODMAPs are found in the same kinds of foods as gluten is. When people go on a gluten free diet, they may be experiencing a placebo effect – expecting to see an improvement in their symptoms, so they do. Or the suspect ingredients causing these problems could be the FODMAPs.

Interestingly, the low FODMAP diet is used to treat those with irritable bowel syndrome, a disorder that has similar symptoms to those experienced by people who believe they have non-celiac gluten sensitivity. Seeing a doctor is the first step if you experience discomfort after eating certain foods. Keeping a food journal is helpful as well. Even if research determines that gluten sensitivity is in your head, clearly the rumblings in your stomach indicate that there is something going on.

What do you think of this new research? Will it stop you from buying gluten-free foods? Let us know in the comments.

38 thoughts on “Gluten Sensitivity May Be In Your Head!”