According to ChildWise research today’s children spend six hours per day in front of computer or TV. When you get out sleep time and time in school, it means they spend nearly all of their free time this way. This is not good. As much as it’s useful to browse the internet and use the computer, kids will be happier and healthier if they enjoy some time away of the screens. 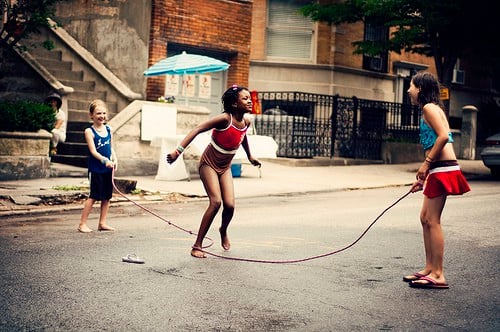 One of the problems is they just don’t know any non-video games that are not boring. Why don’t you try to show them some of the traditional games we all enjoyed in our childhood? Here are ten of the best ones:

This is perhaps the most popular traditional game. It can be played outdoors and indoors and there’s not limit to the number of participants (minimum is 2). One or more of the payers play seekers while the others are hiding themselves wherever they find. In the best known variation of the game the seeker is one and when he spots a hiding player he says loudly his name and where he’s hiding. The first one who is caught becomes the seeker in the next round, and the last one is the winner. Here in Europe we used also to have seeker’s base. When the seeker spots someone hiding he must run back to the base and yell their name there. If the hiding player runs faster and touch the base he is considered saved and will not be the next seeker even if found first. This adds cool sport element to the game.

Cops and robbers is an interesting variation of the tag game. There are two teams of players – one team of cops and one of robbers. The goal of the game is to put all robbers in jail which happens when a cop catches a robber and arrest them. The robbers are given some interval of time to run away and hide before the cops start chasing them. This game requires more players which explains to some extent why it has lost its popularity. Nowadays kids rarely play in large groups (except in a computer network)

Chances are if you tell “four square” to your teenagers they will first think about the popular site. But Four Square is a well-known ball game too. As the name suggest playing it requires four players. Each of the players owns a “quadrant”. The goal of the game is to hit the ball by given rules. The most important rule is to hit the ball just once and not catch it or carry it. Failing to hit the ball correctly results in elimination. The last one to be eliminated is the round winner.

This is another game which is good to play both indoor and outdoor. The players stay behind a line drawn on the floor (or on the grass). One of the players has the role of “Simon”. The player then goes at a some distance from the line and starts giving commands. If a command begins with “Simon says” the players should do the requested action. If the command does not begin with “Simon says” they should not do it. Not obeying a “Simon says” command or obeying a wrong command results in elimination. The last player becomes a winner and in most variations becomes also “Simon” for the next round.

Even adults sometimes play this fun game. The game play is very simple and the game can be played anywhere with two or more players. The players gather together, hide their hands, and upon speaking the name of the game every player raises his hand showing one of the symbols – rock, paper or scissors. The rock wins against scissors because it breaks them. Scissors win against paper because they cut it. Paper wins against rock because it wraps it.

This is a game for two players. They use a tied string to make shapes with fingers. There is a set of figures which the players should make by passing forth and back the string. This game is played all over the world and you maybe know some if its variations.

This game was known as Blind Grandma in my country. One of the players closes his eyes or is blindfolded with a cloth and twirled 3 times round to lose orientation. The other players should remain close to the “blind man” but avoid being caught. When the “blind man” catches a player he or she should try to recognize them by touching, and say their name. In the variation we play here the first player who is recognized becomes the next “blind man”. There are other variations where catching a player results in direct elimination. This game may require some basic supervision to prevent the blindfolded player getting hurt in furniture etc.

This is a marbles game. Marbles are small circle toys made of glass and colored in different colors. There are various games played with them. Playing the ringer involves digging small holes in the ground and targeting marbles into them. Players can play in turn hitting marbles with other marbles. Each player has one turn unless he succeeds targeting the hole in which case he wins another turn. The game ends when all the marbles are in the holes. The player who have scored most marbles is the winner. Some variations include getting out the marble from the whole once it’s scored there, from which point the player who scored it owns the marble.

This very old game is now usually played with elastic band instead of rope. It requires 3 or more players and is more popular among girls. Two players hold the rope and one jumps over it between them. The goal is the jumper to make higher and more complex jumps over the rope without making mistakes.

There are also some brain games that don’t involve much physical activity. Tic-tac-toe is available also as computer game on many devices but it’s good to teach children to play it on paper or even better, on sand, outdoors. While fairly simple game, tic-tac-toe is a good start to draw interest for other more complex mind games like chess for example.Which of these games have you enjoyed most as a kid? Which do you think your children will enjoy today?About the author