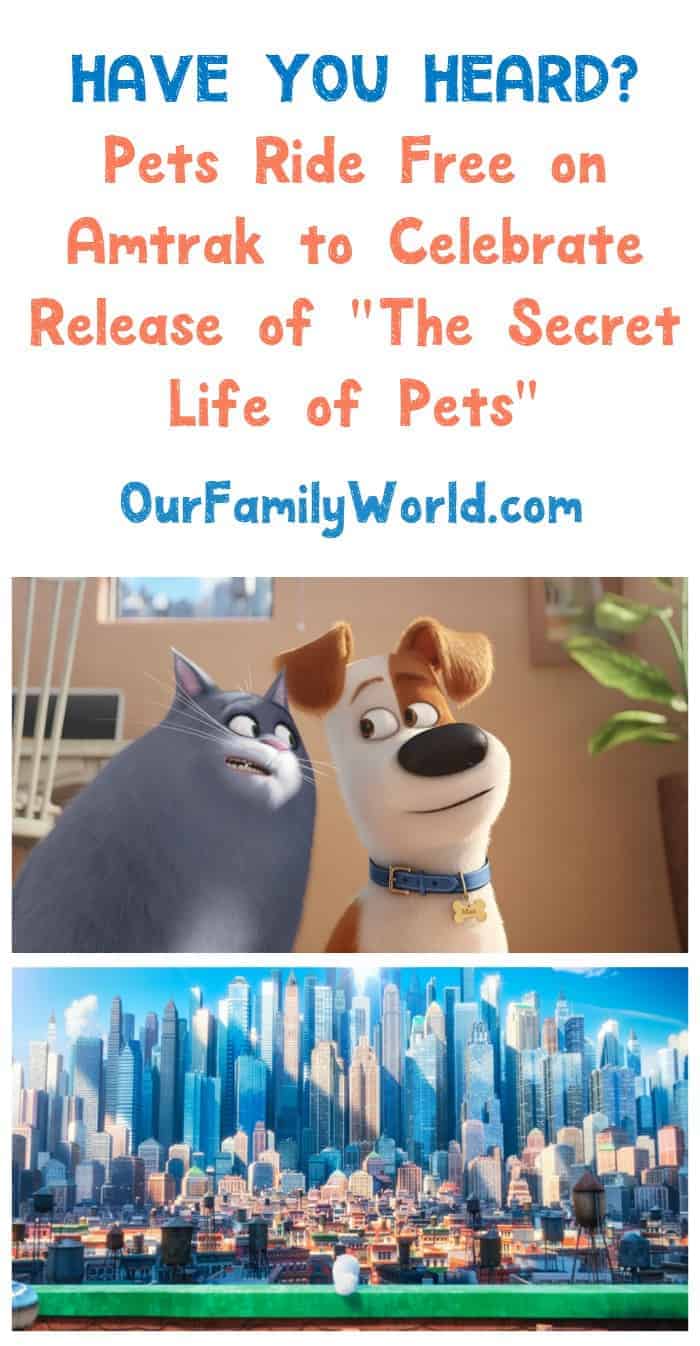 Amtrak and Universal Pictures Home Entertainment are teaming up to promote Amtrak’s “Pets Ride Free” promotion and the DVD release of the movie “The Secret Life of Pets.” The offer is good on trips that are booked between December 6, 2016 and December 11, 2016, for trips taken between December 9, 2016 and March 31, 2017. Over 40 of Amtrak’s destination will take part in the promotion, including San Francisco, Boston, Los Angeles, New York City, Chicago, Miami, Seattle, New Orleans, Dallas and Portland.

In the first year of Amtrak’s pet program, over 15,000 dogs and cats traveled on Amtrak with their owners. The normal fee for pets is an additional $25 each way. There are some restrictions including dogs and cats must weigh up to 20 pounds, can travel on trips up to 7 hours, are allowed in Coach Class and not Sleeper Service or Business Class, only one pet per passenger and pets must be in an approved pet carrier. Check out their pet policy and find out if your family vacation destination is on a pet-friendly route!

Here are some facts about Amtrak:

About the Secret Life of Pets

The Secret Life of Pets is a computer-animated buddy adventure comedy movie. It was released in theaters on July 8, 2016 and will be released on DVD and Blu-ray on December 6, 2016. As of November 27, 2016, The Secret life of Pets has grossed $974.3 million worldwide. The movie showcases what pets do when their owners are at work or at school. It focuses on Katie, the owner of Max, a Jack Russell Terrier, who decides to adopt a dog named Duke, a shaggy Mutt, from the animal shelter. When Max and Duke decide to sneak away, they find themselves lost in the middle of New York City and must find their way home.

The Secret Life of Pets features an all-star voice cast that includes Ellie Kemper as Katie, Louis C.K. as Max and Eric Stonestreet as Duke. Also included are the voices of Kevin Hart as Snowball, Jenny Slate as Gidget, Albert Brooks as Tiberius, Hannibal Buress as Buddy, Dana Carvey as Pops, Lake Bell as Chloe and Steve Coogan as Ozone.

Are you planning to take advantage of the Pets Ride Free deal on Amtrak? Did you see The Secret Life of Pets? Share in the comments!