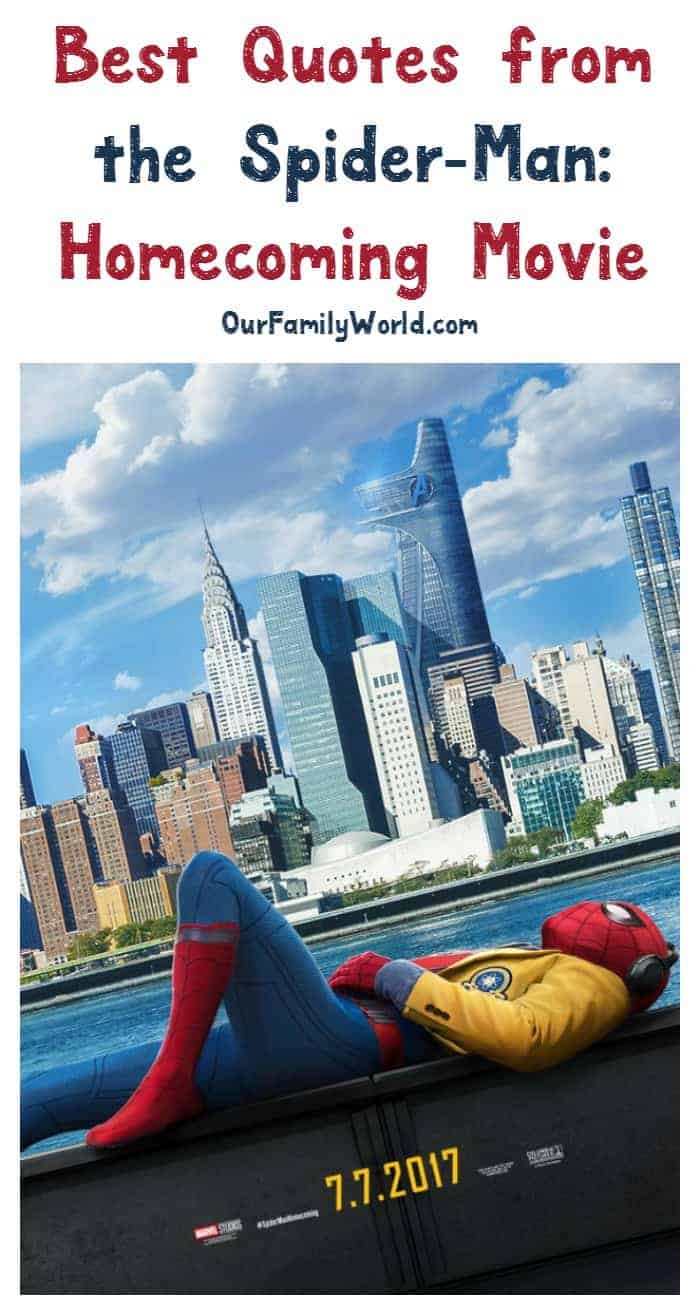 Ready for some of our favorite “Spider-Man: Homecoming” movie quotes? I am so looking forward to catching this one in theaters. I’m really interested to see how they reboot Spidey’s story. Yes, he’s probably had more reboots than just about any other super hero out there, but every incarnation brings something new and exciting to the table.

Haven’t heard of the latest reboot? Here are the major details you need to know! “Spider-Man: Homecoming” is an upcoming superhero movie that is based on the Marvel Comics character, Spider-Man. The movie is set to hit theaters on July 7, 2017, with a sequel, “Spider-Man: Homecoming 2” due in theaters on July 5, 2019. Here are some quotes from the upcoming movie, as well as one quote from each of the 5 previous Spider-Man movies. Peter- “So, to become an Avenger, are there like trials or an interview?”

Peter- “I’m sick of them treating me like a kid all the time!”

Peter- “This is my chance to prove myself.”

Peter- “I was just trying to be like you.”

Tony- “I need you to be better. I’m taking back the suit.”

Peter- “I’m nothing without the suit!”

Tony- “If you’re nothing without the suit, then you shouldn’t have it.”

4- Conversation between Peter Parker and May Parker:

May- “You need to stop carrying the weight of the world on your shoulders.”

Peter- “Who am I? You sure you wanna know? The story of my life is not for the faint of heart.”

In this film, Peter Parker is played by Tobey Maguire.

Curt- “Look at you, Peter. Your grades have been steadily declining. You’re late for class. You always appear exhausted. Your paper on fusion is still overdue.”

Peter- “I know. I’m planning to write it on Dr. Otto Octavius.”

Curt- “Planning is not a major at this university. Octavius is a friend of mine. Better do your research, Parker. Get it done, or I’m failing you.”

Peter- “It’s me, Peter Parker. Your friendly neighborhood–you know. I’ve come a long way since I was the boy bit by a spider. Back then, nothing seemed to go right for me. Now people really like me. The city is safe and sound. Guess I had a little something to do with that.”

Quote from 2012- The Amazing Spider-Man

George- “You know, recently, Dr. Connors gave Gwen a glowing college recommendation. It was beautiful. I read it, I cried. But you would have me believe that he is running around dressed up like a giant dinosaur?”

Peter- “Not dressing up, not a dinosaur. He has transformed himself into a giant lizard.”

George- “Let me ask you a question. Do I look like the mayor of Tokyo to you?”

Peter- “I do some web designs.”

Of all the Spidey movies to date, the first trilogy was my favorite. Maybe because I grew up with the actors that starred in it. After reading through all the fun Spider-Man:Homecoming movie quotes and seeing the trailer, though, it’s entirely possible that this reboot will become a new favorite! We’ll have to wait and see!

This is definitely one that you’ll want to preorder tickets for. Get the latest Comic Book movie news at Fandango Hero Central

Do you have any other favorite Spider-Man: Homecoming movie quotes that we missed? Share below!

16 thoughts on “9 Quotes from Spider-Man: Homecoming & Other Spidey Movies You Need to Read”