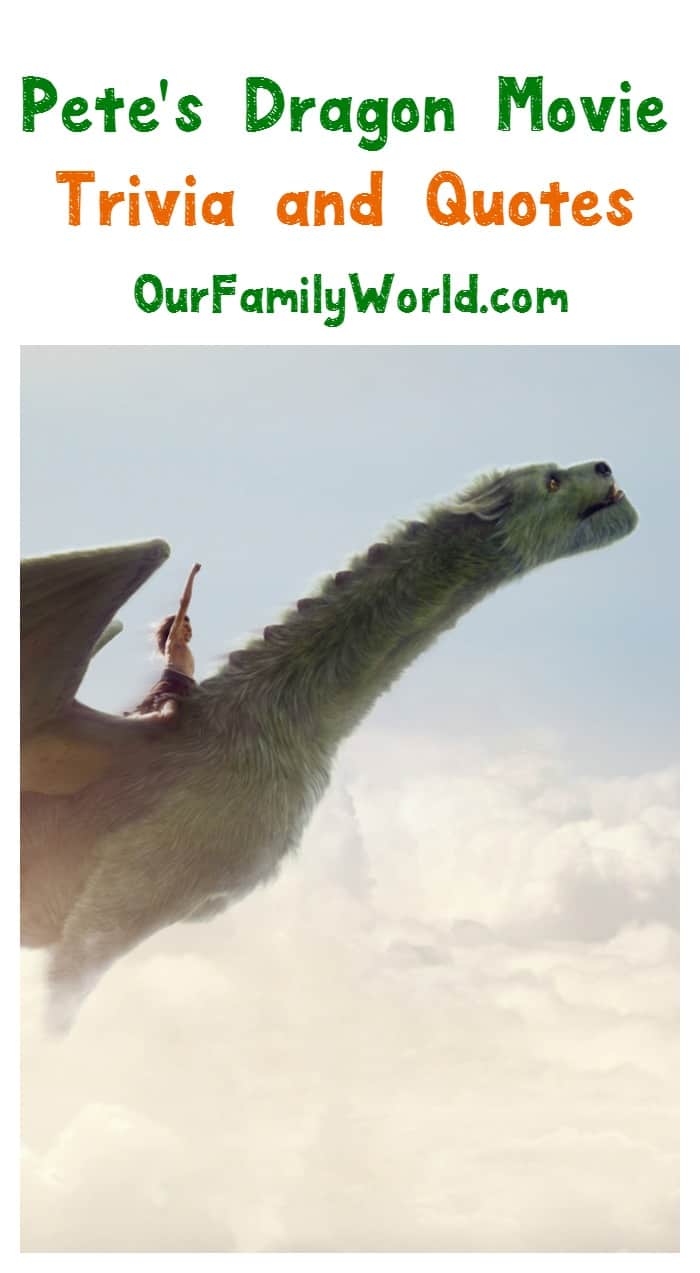 Looking for some great Pete’s Dragon movie quotes and trivia? We have you covered! I’m really looking forward to the upcoming reboot of the classic Disney movie. When it first came out back in the late 70s (I watched it in the early 80s, as I was only 2 when it came out), it was the coolest thing ever to see the combination of animation and live people. I think up until then, the only other movie I recall seeing do that was Mary Poppins. Maybe there were others, but it wasn’t nearly as common as it is now.

The live-action Pete’s Dragon releases into theaters on August 12, 2016. Based on the trailer, it looks like it’s going to be a gorgeous and fun film. Let’s check that out!

Isn’t the dragon stunning? So different than the 1977 version! Now I really wish I had an “imaginary” dragon as my best friend. Seriously, how cool would that be? Enough dreaming, let’s get to those fun Pete’s Dragon movie quotes and trivia, shall we?

The role of Natalie’s uncle, Jack’s brother, was originally cast to Michael C. Hall on January 9, 2015. However, just a couple weeks later on January 29, 2016, Karl Urban was cast in the role, after Hall had to bow out of filming because of a scheduling conflict.

In the 1977 film version, the female lead role’s name is Nora, played by Helen Reddy, while the 2016 version has Grace as the lead female role, played by Bryce Dallas Howard.

While the original 1977 version was written as a musical, the 2016 one will not be. Since it is a Disney film, expect to hear some fabulous scores and maybe a “feature song,” but don’t expect to hear the characters singing their every thought. Violinist Lindsey Stirling talks about how excited she was to work on the soundtrack:

Conversation between Grace and her father, talking about Pete:

Grace- “I guess you heard about the boy.”

Grace’s father- “You know word travels in this town. How long has he been out there?”

Grace’s father- “You don’t survive in a forest for six years alone.”

Conversation between Natalie and Pete, as Natalie studies the drawing done by Pete:

Jack talking to Grace, about Pete:

“Living out in the woods, doing things his own way. Sounds like a boy after your own heart.”

Here are a couple of quotes from the 1977 film version:

Conversation between Nora and Pete:

Nora- “Where did you get that bruise?”

Pete- “Mr. Gogan. I was milking the cow and I missed the bucket.”

Nora: Welcome the dragon while you have a chance / give him his moment to rise up and dance!

Conversation between Merle and Hoagy

Merle: Say, have you seen anything of a mean, fresh, kid, about ye big? Answers to the name of Pete.

Hoagy: Half of the kids here in this town answer to Pete. Other half don’t answer.

We will update the quotes when the film opens (and we have a chance to see it!), so be sure to come back and check those out!

Are you looking forward to seeing this movie? Do you know of any other cool Pete’s Dragon movie quotes or trivia that we missed? Share in the comments!