Looking for the best Peter Rabbit movie quotes and trivia? We’ve got you covered! We’re sharing some of our favorite lines from the movie as well as some really fun facts you need to know before heading out to see this great family movie! 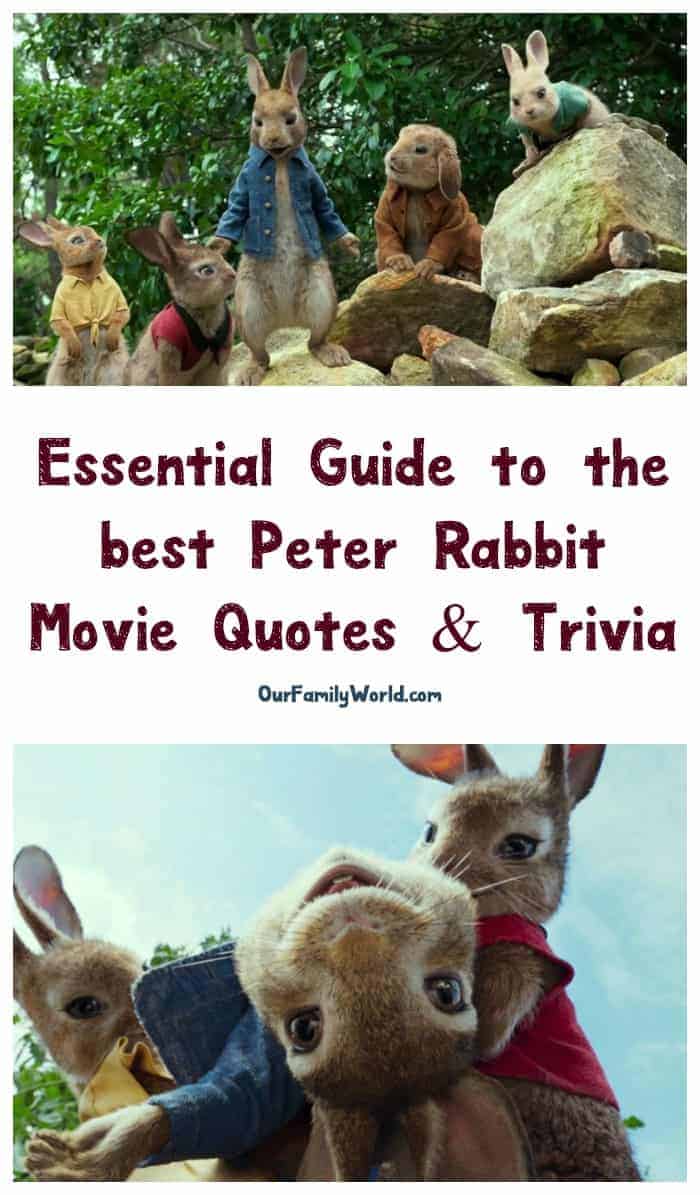 If you haven’t heard the big news, Peter Rabbit is an upcoming 3D live-action/CGI-animated, adventure, comedy movie that will hit theaters on February 9, 2018. The movie is based on the character, Peter Rabbit, created by Beatrix Potter. Here are some movie quotes and movie trivia from Peter Rabbit. Let’s check them out, then keep reading for a few fun facts about the Peter Rabbit cast!

Never Miss A Story ► Sign Up for our weekly newsletter.

1. Bea, as a voiceover in the movie’s trailer:

2. Peter Rabbit, talking to the fox, in the garden:

Peter Rabbit- “Wait. Didn’t you try to eat me? Show me your teeth? Do like a… Go like…”

(Peter Rabbit growls and the fox growls back)

James Corden provides the voice for the role of Peter Rabbit. He has been the host of The Late Late Show with James Corden, since 2015.

3. Conversation between Bea and her new neighbor, Thomas McGregor:

Thomas- “I just need to keep the wildlife out, where they belong!”

Thomas- “Yes! They’re angels. This is their place.”

This is a funny quote because Thomas doesn’t like rabbits, but he does seem to like Bea. He notices that Bea is an animal lover, so he pretends to be an animal lover too.

4. Peter Rabbit, talking to the other animals, after they see Bea and Thomas on a date:

Peter Rabbit- “Okay, so he’s tricked her. There’s only one way out of this. He’s got to go!”

5. Conversation between Thomas and Bea, after he finds mouse traps in his bed, which of course, were planted by Peter Rabbit and his animal pals:

Thomas- “Did you know they set traps in my bed?”

Bea- “They are rabbits! They wouldn’t hurt anyone!”

The Cast of Peter Rabbit

For the most part, your kids aren’t really going to recognize the voices of the Peter Rabbit cast, but you might! The actors are best known for their appearances on late-night TV, horror movies, and other grownup films. Let’s check them out.

If you’ve been following the news about Peter Rabbit, you’ve probably heard that Beatrix Potter fans are not exactly thrilled with this version of the beloved bunny. In the original story, Peter was a bit mischievous, but his antics were more along the lines of chomping on Mr. McGregor’s veggies. In this version, Peter ups the trouble-making ante by throwing massive parties in poor McGregor’s house! Yes, the modernized version is definitely a far cry from Potter’s original tale, but think about this: Disney’s princess movies are a far cry from the original Grimm fairy tales.

If you can separate the movie from the original story in your head, Peter Rabbit looks like a fun family movie. You have to go into it thinking of it as a whole different entity. Sort of like fan fiction versus a true live-action retelling of the story. After the movie, I recommend reading the original tale with your children for a little compare/contrast exercise. Doing so not only encourages reading, but also opens up a whole slew of great discussion topics about how things have changed since Potter penned the original story.

Are you planning to see this movie with your family? Have you heard any other great Peter Rabbit movie quotes or trivia? Share below!