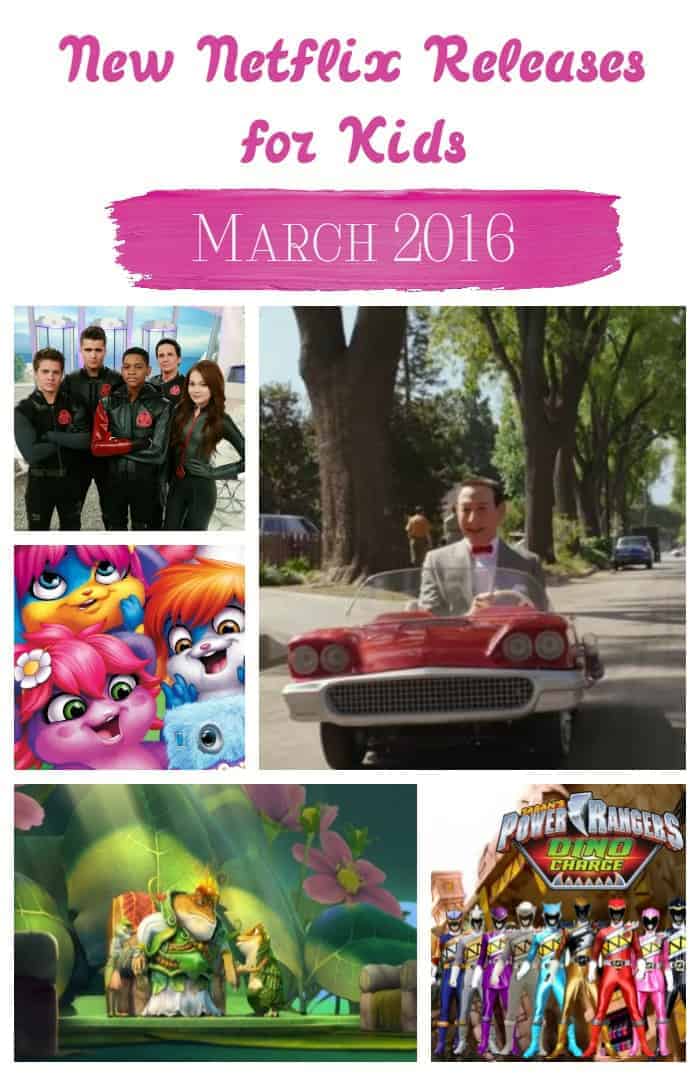 Ready for some brand new releases on Netflix for kids in March 2016? I know I am! As much as I loved the February releases, it’s time to get some new shows streaming into our house. As always, Netflix is serving up plenty of awesome kid fare for everyone from tots to tweens. My son is anxiously awaiting Lab Rats:Season 4 and Pee-Wee’s Big Holiday. Let’s check out what’s happening on Netflix for kids in March 2016.

New Releases on Netflix for Kids in March 2016

The Frog Kingdom is an animated adventure drama featuring the voices of Bella Thorne, Cameron Dallas and Drake Bell. When the Frog King announces that the winner of the Froglympics will win his daughter’s hand in marriage, the princess does what any sensible girl would do- she bolts and starts training as a commoner so she can win her own hand (and right to decide who she’ll marry).

Lab Rats focuses on the life of Leo, whose mother gets married to a rich genius and he befriends a trio of bionic superhumans. My son is crazy abotu this show. It’s a huge hit for tweens. If you’re looking for something to watch with your kids, this is the one, since it’s entertaining to parents too. Lego Friends and Lego Bionicle are brand new to Netflix.

Digimon Fusion is an anime children’s television series about a young boy, Taiki, who tries to save the world using Digimon.

Dinotrux is about character that are part dinosaur and part construction vehicle. Popples is a Netflix Original based on the Saban Brands toy line. Anyone who grew up in the 80s is sure to remember them! They were cute little furballs that tucked into themselves. They were like a pet AND a ball! I’m not going to lie, I kind of want one again.

Power Rangers Dino Charge features a dinosaur/alien named Keeper. The story goes like this: millions of years ago, the evil Sledge tried to steal the greatest power in the universe (the Energems), because that’s what evil guys named Sledge do. An Alien named Keeper gave the power to the dinosaurs and Sledge was blasted into space. Now, the Energems have been found, so of course Sledge has come back. What we need is a hero! Thank goodness we have…the Power Rangers Dino Charge!

Mr. Peabody and Sherman are back again in the Netflix original that continues the adventures of the world’s smartest dog and his boy.  Pee-Wee’s Big Holiday is a Netflix Exclusive and the first new Pee-Wee movie since 1988.

Veggie Tales in the House features those lovable anthropomorphic vegetables.

Last Call: Catch Your Favorites Before They Are Gone!

Are your little ones really looking forward to any of these new releases on Netflix for kids in March 2016? Tell us in the comments!