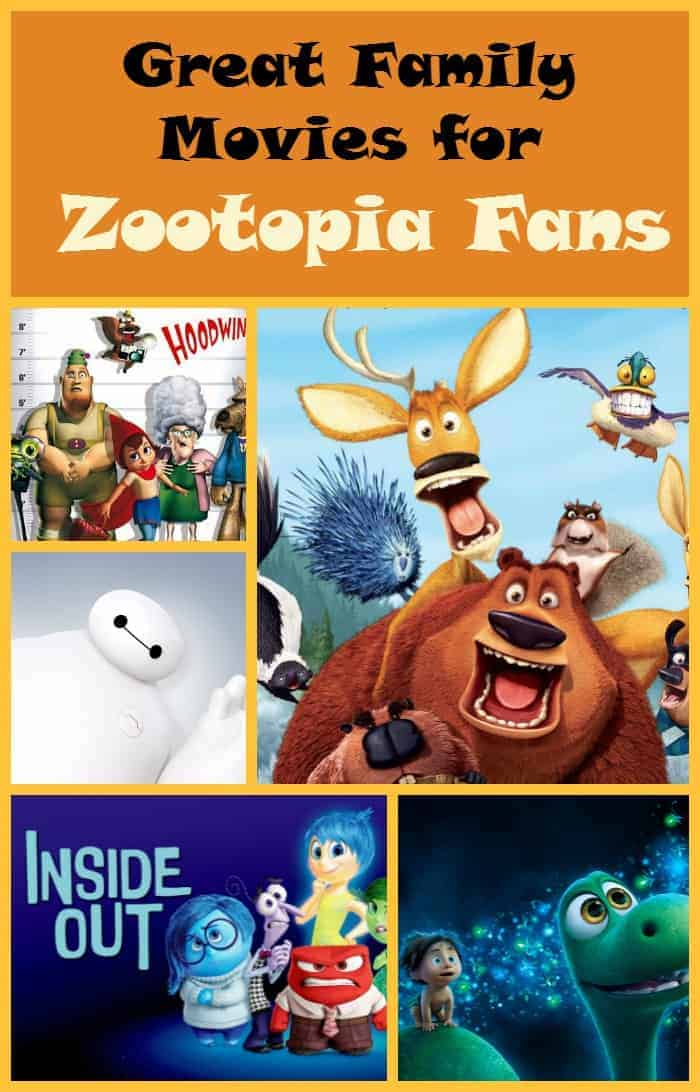 After seeing the new hit family movie, everyone will be asking “where can we see more movies like Zootopia?” It’s such a fun film, it’s no wonder your kids will be wanting more! While Zootopia is pretty unique, you can find other fun films to get them through their post-movie withdrawal! Check out a few of our favorite movies like Zootopia!

Inside Out is a 2015 3D computer animated adventure, comedy, drama movie, starring the voices of Kaitlyn Dias, Amy Poehler, Phyllis Smith, Bill Hader, Lewis Black and Mindy Kaling. The story is about a young girl, Riley, who has 5 emotions that lead her through the adventures of moving to San Francisco from Minnesota: Joy, Sadness, Fear, Anger and Disgust.

Open Season is a 2006 computer animated comedy film starring the voices of Martin Lawrence, Ashton Kutcher, Gary Sinise, Debra Messing, Billy Connolly, Jon Favreau, Georgia Engle, Jane Krakowski, Gordon Tootoosis and Patrick Warburton. The movie focuses on Boog, a domestic bear who tries to defeat a group of human hunters, along with is group of friends, Eliott, a deer with one antler, McSquizzy, a grumpy squirrel, Reilly, a beaver, Giselle, a mule deer, Serge, a mallard duck with a French accent and Rosie and Maria, twin skunk sisters.

Hoodwinked is a 2006 animated retelling of the classic story of Red Riding Hood, with a whole lot of twists! Of all the movies like Zootopia on this list, Hoodwinked will most satisfy that craving for more mystery and intrigue involving animals. The movie starts where the fairy tale ends. Chief Grizzly and Detective Bill Stork are called in to investigate a domestic disturbance at Granny’s cottage, involving a girl, a wolf and an ax. Are those events related to the Goody Bandit, a thief that has been stealing yummy treats from town shops? You’ll have to watch it to find out!

Rent or stream one of these great movies like Zootopia and keep the fun going during your family movie night at home!

Do you have any favorite family movies like Zootopia? Tell us in the comments!

22 thoughts on “5 Fabulous Family Movies for fans of Zootopia”