Looking for more fab family movies like The Emoji movie? Check out 10 of our all-time favorite animated flicks that beg to be watched together! 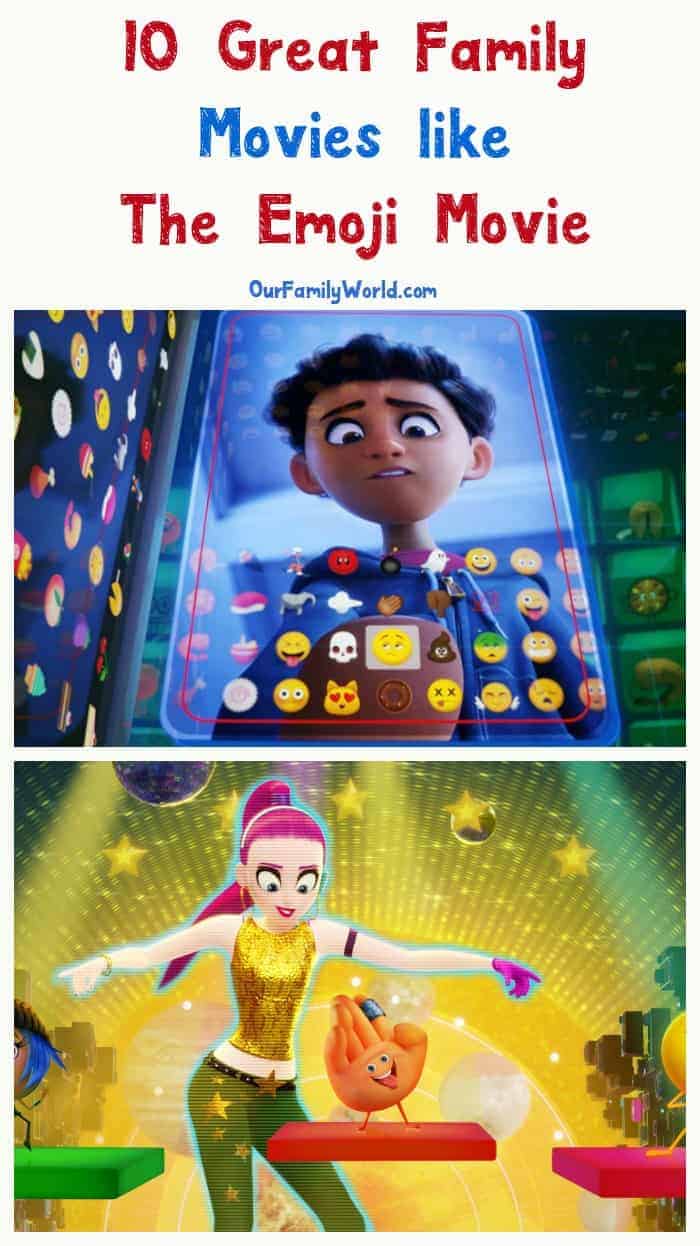 If you like computer animated movies that feature adventure and comedy, then you are going to want to see The Emoji Movie, set to hit theaters July 28, 2017.  After checking out some of the trivia and quotes about the movie, we’re really looking forward to seeing it with our families! The flick takes place entirely inside your smartphone, in a world called Textopolis where all your favorite emojis live.

Cute, right? While you’re waiting for it to release, check here are some other great movies for you to check out!

Monsters Inc. is a 2001 computer animated comedy movie that is the prequel to the 2013- Monsters University. The Monsters Inc. Factory is run by monsters, designed to scare kids. The movie features the voices of John Goodman, Billy Crystal, Jennifer Tilly and Steve Buscemi.

Finding Nemo is a 2003 computer animated movie that combines comedy, drama and adventure. It is the prequel to the 2016- Finding Dory

. Marlin, a clownfish and Dory, a blue tang fish, set off to find Nemo, Marlin’s kidnapped son. It features the voice cast of Albert Brooks, Ellen DeGeneres and Alexander Gould.

is a 2006 animated comedy, drama movie that is the sequel to the 2003- Brother Bear. Bear brothers, Kenai and Koda, bond with Nita, a young human. The movie features the voices of Patrick Dempsey, Jeremy Suarez and Mandy Moore.

4- The Fox and the Hound

The Fox and the Hound is a 2006 animated, drama, adventure movie that is the sequel to the 1981- The Fox and the Hound. The movie showcases the lives of Tod, a red fox and Copper, a hunting dog, during their younger years. It features the voice cast of Reba McEntire, Patrick Swayze, Jonah Bobo and Jeff Foxworthy.

is a 2007 computer animated comedy movie. Barry Benson, a honey bee, tries to defend all bees against humans. The movie stars the voices of Jerry Seinfeld and Renee Zellweger.

is a 2010 computer animated comedy, dram movie. It is the 3rd movie in a series of 4 in the Toy Story film franchise: 1995- Toy Story, 1999- Toy Story 2 and Toy Story 4, due in theaters on June 21, 2019. As Andy Davis prepares for his move to college, the toys are uncertain of their future. It features the voices of Tom Hanks, Tim Allen, Joan Cusack, Don Rickles and John Ratzenberger. Moms, be prepared to cry at the end! I was kind of taken by surprise at just how bittersweet the ending was!

Home is a 2015 computer animated movie that combines science fiction, comedy and adventure. It is loosely based on the 2007 book- The True Meaning of Smekday- by Adam Rex. The movie showcases the voice cast of Jim Parsons, Rihanna, Steve Martin and Jennifer Lopez. This is one of my favorite movies like The Emoji movie on this list! There’s just something about Oh the Boov that makes me happy.

is a 2015 computer animated buddy, comedy movie. It is the 4th movie in the Open Season film franchise: 2006- Open Season, 2008- Open Season 2 and 2010- Open Season 3. The gang is back, including Boog, Elliot, Gisele and Serg. The movie stars the voices of Donny Lucas, Will Townsend, Brian Drummond and Melissa Sturm.

is a 2015 computer animated comedy, drama, adventure movie. Arlo, a young Apatosaurus and Spot, a young caveboy, set out on an adventure through a magical landscape. It features the voice cast of Raymond Ochoa, Jack Bright, Sam Elliott and Anna Paquin.

Moana is a 2016 computer animated movie that features musical, fantasy and adventure. Moana, the daughter of Chief Tui, sets off to find Maui, the legendary demigod. The movie stars the voices of Auli’I Cravalho, Dwayne Johnson, Alan Tudyk and Nicole Scherzinger. Check out our delicious Moana punch recipe for a refreshing movie treat!

These fabulous family movies like The Emoji movie should keep you busy until July 28th! Plan a few fun movie nights leading up to the big release date!