Love movies like Spider-Man: Homecoming? Make it a superhero summer with these 13 more amazing movies to add to your watch list! Check out our top five, then read on for more movies that your whole family will love. 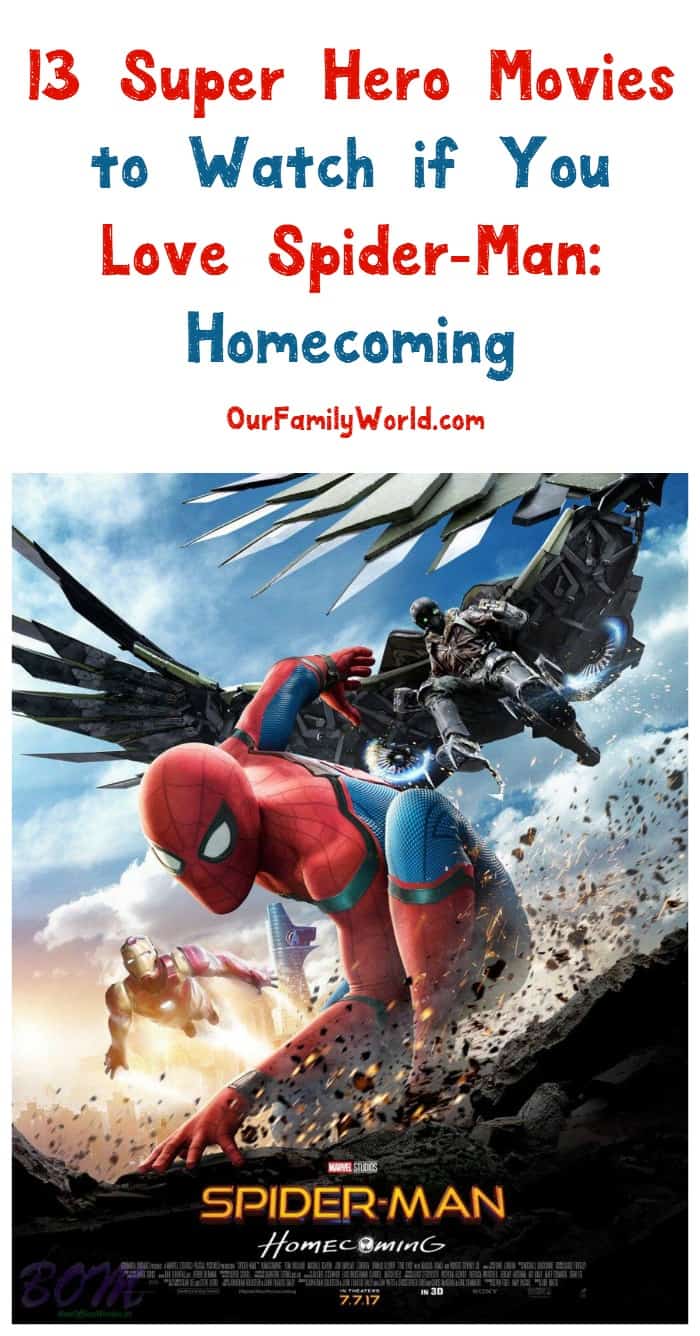 Spider-Man: Homecoming is an upcoming superhero movie that features science fiction and fantasy. It is based on the Marvel Comics character of Spider-Man. The movie opens in theaters on July 7, 2017. Learn more about this latest Spidey reboot with our favorite trivia facts and best quotes from all the Spider-Man movies.

Affiliate links included below. Thanks for your support!
Get the latest Comic Book movie news at Fandango Hero Central

is a 2005 superhero movie that is based on the Batman character from DC Comics. It is the reboot of the Batman movie series: 1989 Batman, 1992 Batman Returns, 1995 Batman Forever and 1997 Batman & Robin. It is also the prequel to the 2008 The Dark Knight and the 2012 The Dark Knight Rises. The movie showcases the life of Bruce Wayne, from his early fears of bats, to the death of his parents and his path to becoming Batman. Batman Begins stars Christian Bale as Bruce Wayne/Batman.

is a 2006 superhero movie that is based on the Superman character from DC Comics. It is the dedication sequel to the 1978 Superman and the 1980 Superman II. After a 5-year absence from Earth, Clark Kent returns to discover his old foe, Lex Luthor, is planning to use Kryptonian technology to destroy the world and his love interest, Lois Lane, is engaged to Richard White. Superman Returns stars Brandon Routh as Clark Kent/Superman, Kevin Spacey as Lex Luthor, Kate Bosworth as Lois Lane and James Marsden as Richard White.

is a 2008 superhero movie that is based on the Iron Man character from Marvel Comics. It is the first movie in the current series of 15 Marvel Cinematic Universe films, with 9 more currently in production. It is the prequel to the 2010 Iron Man 2 and the 2013 Iron Man 3. Tony Stark, a wealthy engineer, who was held captive in a war-torn Afghanistan cave by a terrorist group, later fights evil by creating a powered exoskeleton. Iron Man stars Robert Downey Jr. as Tony Stark/Iron Man.

is a 2008 superhero movie that is based on the Hulk character from Marvel Comics. It is the second movie in the current series of 15 Marvel Cinematic Universe films, with 9 more currently in production. Dr. Bruce Banner is on the run from the U.S. military, after he becomes part of an experiment which causes him to become The Hulk, a giant green monster, when his heart rate reaches 200. The Incredible Hulk stars Edward Norton as Bruce Banner/The Hulk.

is a 2011 superhero movie that is based on the Green Lantern character from DC Comics. It is the prequel to the upcoming Green Lantern Corps, due in theaters on July 24, 2020. Hal Jordan, a reckless test pilot employed with Ferris Aircraft, is chosen to be the first human member of an intergalactic police force, known as Green Lantern Corps and is granted a power ring that gives him superpowers. Green Lantern stars Ryan Reynolds as Hal Jordan/Green Lantern.

More superhero movies you’ll love if you like Spider-Man!

While those five are our picks for the all-time best when it comes to movies like Spider-Man: Homecoming, they definitely are the only choices. It seems like a new superhero movies comes out every few months, doesn’t it? Check out a few more on our watch list that came out within the last year!

These are favorite movies like Spider-Man: Homecoming. Which one(s) did you watch? Tell me in the comment section below. I would love to hear from you.