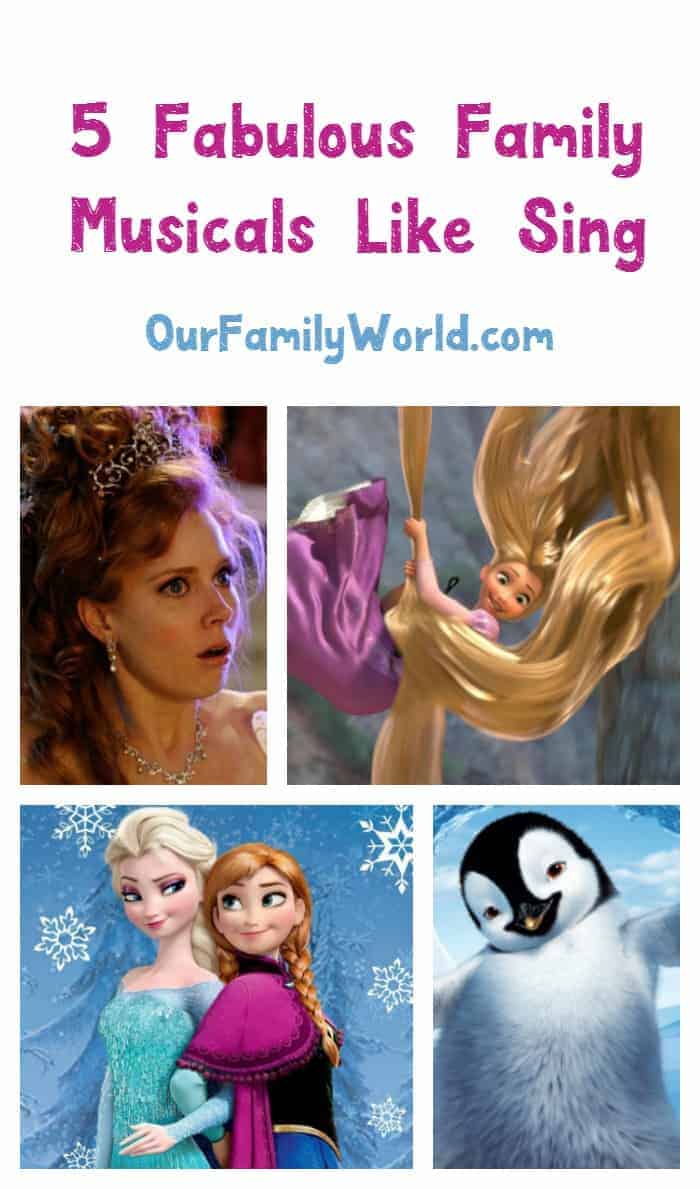 Looking for more fantastic musical movies like Sing to watch with your family? We’ve got you covered! If you haven’t heard about the upcoming film, it follows the adventures of a theater owner who tries to save his business from being shut down by hosting the most epic singing competition of all time. While the star-studded family film doesn’t come out until December 21 (just in time for Christmas), there are plenty of other fabulous musicals that your whole family can enjoy during the wait! Take a peek at a few of our favorites that will have kids and adults singing along!

Related: 13 Fun Facts and Quotes from the Sing Movie

is a 1999 animated movie that is the sequel to the 1940 movie of the same name. Just like the 1940 version, Fantasia 2000 is divided into segments that are set to classical music pieces. Segments are introduced by various celebrities including Steve Martin, Bette Midler, James Earl Jones and Angela Lansbury. Both of the Fantasia films are an amazing way to introduce your kids to classical composers.

is a 2006 computer animated musical fantasy movie. It features the character of Mumble, an emperor penguin who was born to Norma Jean and Memphis. While all other emperor penguins can sing, Mumble cannot but he can surely tap dance. Happy Feet features the voice cast of Elijah Wood as Mumble, Nicole Kidman as Norma Jean and Hugh Jackman as Memphis.

is a 2007 live-action/animated movie that features music, fantasy, romance and comedy. It focuses on Giselle, who is an independent, optimistic, romantic who dreams of a happily ever after. Queen Narissa is an evil queen who wants the kingdom’s throne for herself. When the queen notices her stepson, Prince Edward, falling in love with Giselle, she devises a plan to send Giselle off far away to New York City. There, Giselle meets and falls in love with Robert, a divorce attorney. Enchanted stars Amy Adams as Giselle, James Marsden as Prince Edward, Susan Sarandon as Queen Narissa and Patrick Dempsey as Robert.

is a 2010 computer animated musical fantasy comedy movie that is loosely based on the 1812 fairy tale, Rapunzel, by The Grimm Brothers. It showcases the story of Rapunzel, a young princess with long magical hair, who has spent her life secluded in a tower. She meets Flynn Rider, a runaway thief, who whisks her away to show her the world she has been longing to see. Tangled stars the voices of Mandy Moore as Rapunzel and Zachary Levi as Flynn Rider.

is a 2013 computer animated movie that combines music, fantasy, comedy and drama. It is inspired by the 1844 fairy tale, The Snow Queen, by Hans Christian Anderson. The movie focuses on Queen Elsa and her sister Princess Anna. When Queen Elsa mistakenly uses her powers and turns the kingdom into an eternal winter, Princess Anna tries to change things back to normal with the help of Kristoff, an iceman; Sven, Kristoff’s reindeer and Olaf, a comical and naïve snowman. Frozen features the voice cast of Idina Menzel as Elsa, Kristen Bell as Anna, Jonathan Groff as Kristoff and Josh Gad as Olaf.

Do you have any favorite musicals? What other movies like Sing would you recommend? Share in the comments!