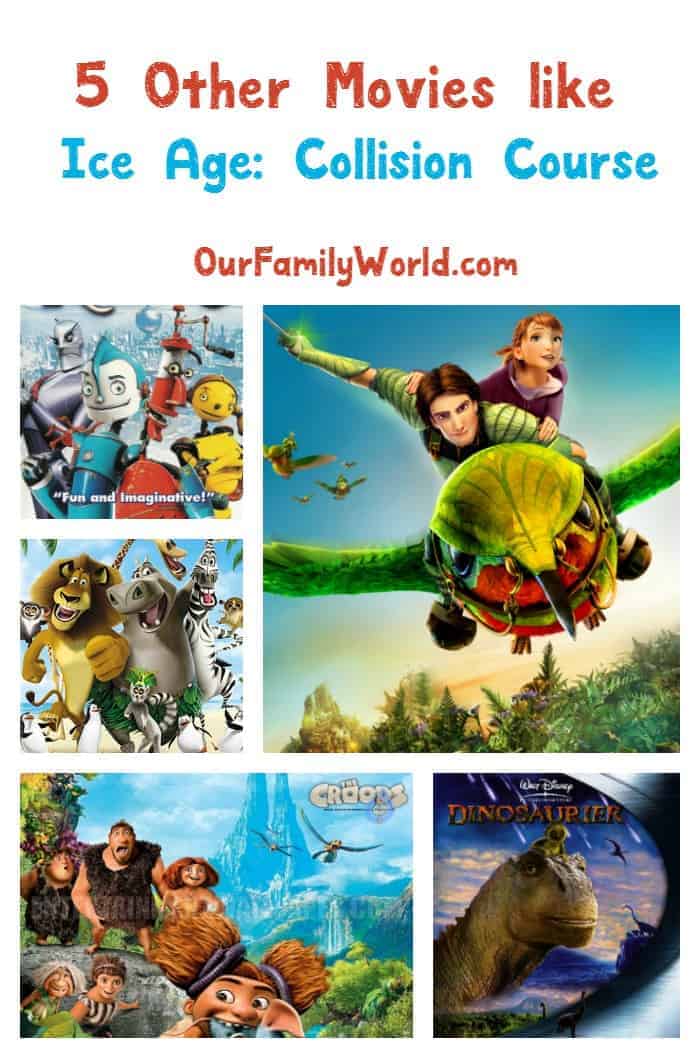 Looking for more great movies like Ice Age: Collision Course, aside from the other films in the franchise? No problem! Guess what? There are tons of good family movies that feature elements similar to those in Ice Age. Be it prehistoric fun, talking animals galore or even a futuristic “buddy” comedy, there’s something perfect for your next movie night. Check out our five favorite other movies to enjoy like Ice Age: Collision Course.

Dinosaur is a 2000 adventure movie that combines computer animation and live action. The movie tells the story of Aladar, a dinosaur known as an Iguanodon. When a meteor hits, he and his lemur friends set out in search of a new home and along the way, encounter other dinosaurs who are being hunted by predator dinosaurs. The movie features the voices of D.B. Sweeney, Alfre Woodard, Ossie Davis, Max Casella and Hayden Panettiere.

Robots is a 2005 computer animated movie that combines dystopian with comedy and science fiction. The movie tells the tale of Rodney, a young inventor who travels to Robot City to land an inventor’s job, but soon finds out the management at the company are sinister and evil. The movie features the voices of Ewan McGregor, Greg Kinnear, Halle Berry, Amanda Bynes, Drew Carey, Mel Brooks and Robin Williams.

Madagascar is a 2005 computer-animated comedy movie that features the voices of Ben Stiller, Jada Pinkett Smith, David Schwimmer and Chris Rock. When Marty, a zebra, escapes the plush life of the zoo to see the outside world, his friends decide to follow along. The friends end up on Madagascar, with a group of happy lemurs.

Epic is a 2013 computer animated movie that mixes together fantasy, action and adventure. The movie tells the tale of Mary Katherine, a teenage girl who suddenly finds herself in the midst of a war between the forces of good and evil. She befriends a group of rag-tag characters, who team up to save the worlds. The movie features the voices of Amanda Seyfried, Beyonce Knowles, Colin Farrell, Pitbull. Steven Tyler, Josh Hutcherson and Aziz Ansari.

The Croods is a 2013 computer animated comedy adventure movie that features the voices of Nicholas Cage, Emma Stone, Ryan Reynolds, Cloris Leachman, Clark Duke and Catherine Keener. A caveman family is on an adventure through a strange world after their cave is destroyed, along with some help from an inventive little boy.

These other movies like Ice Age: Collision Course should get your family movie marathon weekend started! While not all are from the same studios that brought you the prehistoric franchise, they all have some element in common with Ice Age.

4 thoughts on “5 Other Movies Like Ice Age: Collision Course”