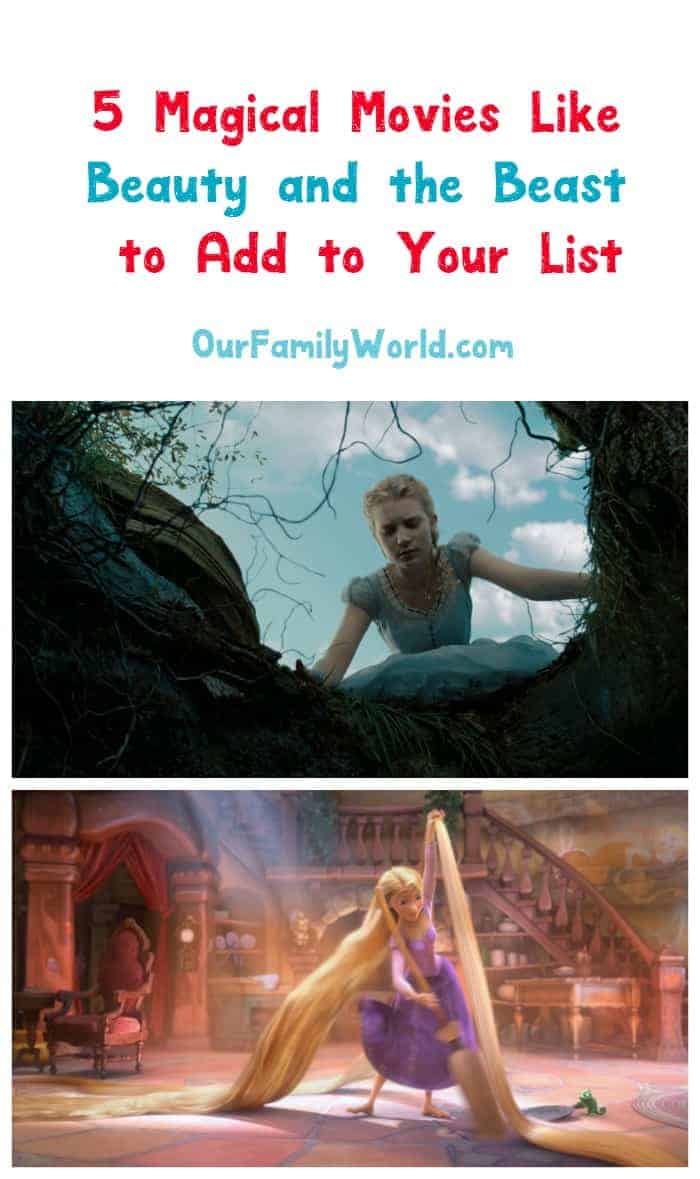 As far as family films go, magical movies like Beauty and the Beast are among my favorite genres. They really do have it all! Romance, fantasy, music, action, adventure. Disney definitely knows how to put on a good show for everyone in the house! Since the release date of Beauty is still over a month away, we’ve been getting our fill with other movies that invoke the same sense of wonder. Check out a few of my favorite movies like Beauty and the Beast to watch on your next family movie night!

Beauty and the Beast is an upcoming movie that features romance, fantasy and musical all combined into one. It tells the story of the Beast, a prince who looks more like a monster than anything and Belle, a beautiful young woman, who fall in love. If you’re definitely planning to see it in theaters (we sure are!), Fandango has a great offer right now through March 9th.  Check it out:

Here are some other great movies like Beauty and the Beast.

is a 2010 fantasy adventure movie that is based on the 1865 book titled Alice’s Adventures in Wonderland and the 1871 book titled Through the Looking Glass, both written by Lewis Carroll. The movie was also inspired by the 1951 animated movie of the same name. The movie tells the story of Alice Kingsleigh, who tries to end the Red Queen’s reign of terror, with the help of the White Queen and the Mad Hatter. Alice in Wonderland stars Mia Wasikowska as Alice, Helena Bonham Carter as the Red Queen, Anne Hathaway as the White Queen and Johnny Depp as the Mad Hatter.

is a 2010 computer animated movie that combines musical, fantasy and comedy. It is loosely based on the 1812 fairy tale by the Brothers Grimm. The movie showcases the tale of Rapunzel, who has spent her life in a tower, until Eugene “Flynn Rider” Fitzherber, a runaway thief, takes her on a journey into the world she has never known. Tangled stars the voices of Mandy Moore as Rapunzel and Zachary Levi as Eugene “Flynn Rider” Fitzherbert.

is a 2012 computer animated movie that features fantasy, comedy and drama. The movie tells the tale of Princess Merida, who is determined to make her own way in life, causing chaos with her kingdom, especially with her mother, Queen Elinor. Brave stars the voice cast of Kelly Macdonald as Merida and Emma Thompson as Queen Elinor.

is a 2013 computer-animated musical fantasy movie that was inspired by the 1844 fairy tale titled The Snow Queen by Hans Christian Andersen. The movie showcases the story of Queen Elsa, who accidentally uses her power to turn her kingdom into an icy winter, and her sister, Princess Anna, who teams up with Kristoff, an iceman, his reindeer Sven and Olaf, a comical snowman to change things back to normal. Frozen stars the voice cast of Idina Menzel as Elsa, Kristen Bell as Anna, Jonathan Groff as Kristoff and Josh Gad as Olaf.

is a 2015 romantic fantasy movie that is based on the 1697 fairy tale of the same name by Charles Perrault and was inspired by the 1950 animated movie of the same name. After her father suddenly passes away, Ella is forced to live with her wicked stepmother, Lady Tremaine and her evil stepsisters, Anastasia and Drisella. But, her life turns around when she meets Prince Kit. Cinderella stars Lily James as Ella/Cinderella, Cate Blanchett as Lady Tremaine, Holliday Grainger as Anastasia, Sophie McShera as Drisella and Richard Madden as Prince Kit.