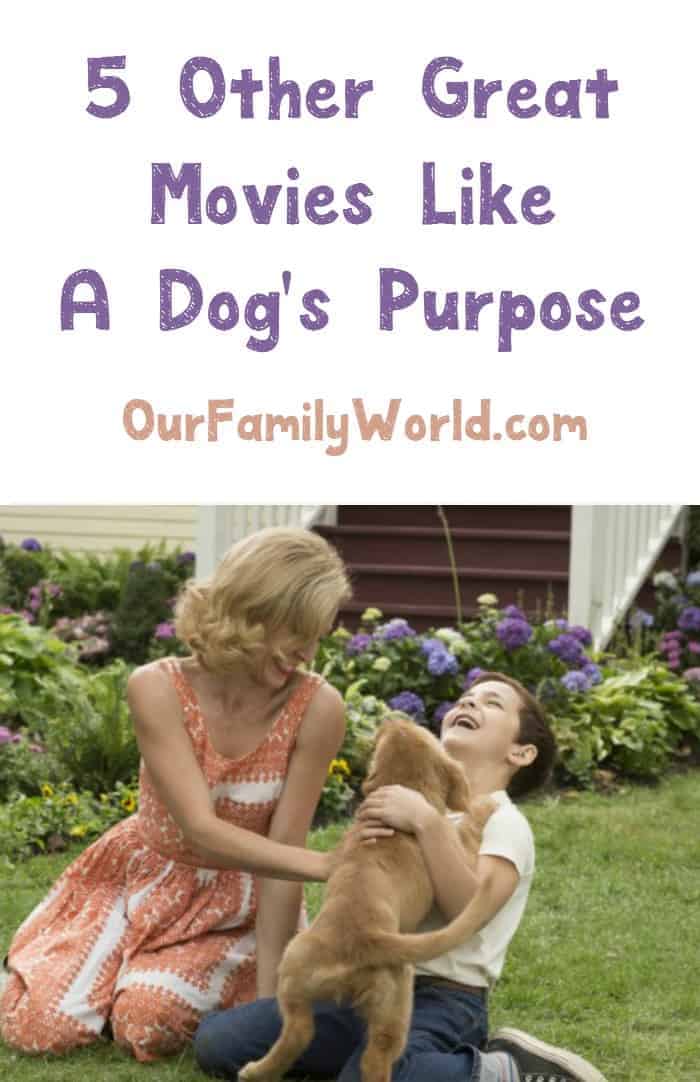 Looking for more heartwarming animal movies like A Dog’s Purpose? Gather the family around the TV and check out one of these sweet tales (or should that be tails?)! A Dog’s Purpose is an upcoming movie filled with drama and comedy. It is set to hit theaters on January 27, 2017 and is based on the 2010 book of the same name by W. Bruce Cameron. The movie is about a dog who looks for his purpose in life, through different owners and four lifetimes. Here are some other cute and funny movies like A Dog’s Purpose.

Related –> All the Best Movie Trivia from A Dog’s Purpose

My Dog Skip is a 2000 family drama movie that is based on the 1995 biography of the same name by Willie Morris. The movie takes place in Mississippi during the 1940’s and centers on Willie Morris, a young boy who is given a Jack Russell Terrier for his birthday, which he named Skip. It turns out that Skip would change some aspects of Willie’s life, more than he could ever imagine. My Dog Skip stars Frankie Muniz as Willie Morris and Harry Connick Jr. who is the narrator.

Dog Gone is a 2008 comedy movie. The movie focuses on Owen, a young boy who encounters a Golden Retriever that was being mistreated by a trio of bullies: Blackie, Bud and Arty. Owen manages to get the dog away from the bullies and names her Diamond. Soon, he discovers the trio are suspects in a diamond heist, diamonds they hid on the dog. Dog Gone stars Luke Benward as Owen, French Stewart as Blackie, Kevin Farley as Bud and Kelly Perine as Arty.

Hachi: A Dog’s Tale is a 2009 drama movie that is based on the true story of a dog named Hachiko, an Akita Inu breed of dog from Japan. The movie is also a remake of the 1987 movie titled The Tale of Hachiko. It showcases light on Professor Parker Wilson, who takes home an abandoned dog whom he names Hachiko. Parker and Hachiko formed a tight bond and the dog was loyal to Parker, even after his death. Hachi: A Dog’s Tale stars Richard Gere as Parker Wilson.

A Dog Year is a 2009 comedy drama movie that is based on the 2003 memoir titled A Dog Year: Twelve Months, Four Dogs and Me by Jon Katz. Jonathan Katz is a man going through a mid-life crisis. He takes in Devon, a Border Collie, who was abused but still highly overactive. From that moment on, Jonathan’s life was never the same again. A Dog Year stars Jeff Bridges as Jonathan Katz.

Oddball and the Penguins

Oddball and the Penguins is a 2015 family drama movie that is based on the true story of Oddball, a Maremma Sheepdog that lived in Middle Island, Australia. It focuses on Swampy, an eccentric chicken farmer, who trains Oddball to protect the penguins on the island from vicious fox attacks. Oddball and the Penguins stars Shane Jacobson as Swampy.

I just love feel-good movies about dogs and their families, don’t you? Can you think of any other movies like A Dog’s Purpose that we missed? Share in the comments!