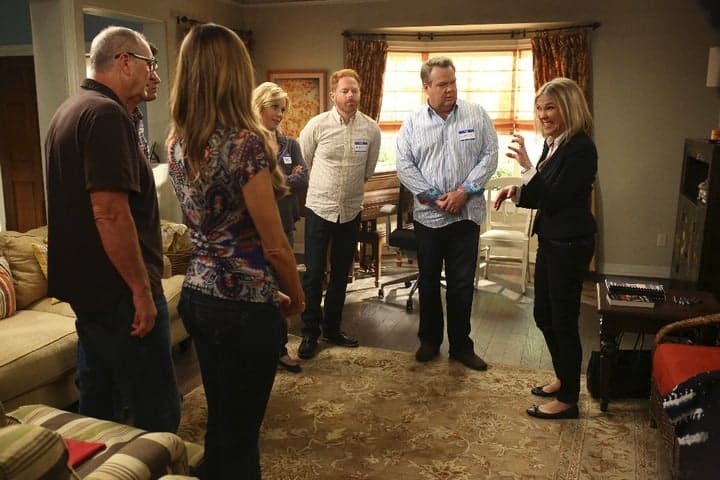 In last night’s episode of Modern Family, Season 7, Episode 8 (Clean Out Your Junk Drawer), the family meets with a therapist to de-clutter their emotional lives. Find out what happens in our recap and highlights of the show!

Modern Family returns tonight after being off last week. Actress Catherine O’Hara guest stars on tonight’s episode as Dr. Radcliffe, a famous self-help author. She meets with the Pritchett-Delgado-Pritchett families with the goal of helping them to de-clutter their emotional lives. So, let’s take a look at the couples of Modern Family and what happened with them tonight on Clean out Your Junk Drawer.

Gloria wants Jay to be more expressive with his feelings so she books a group session with Dr. Radcliffe. So, she along with Jay, Claire and Phil and Mitch and Cam all attend a therapy session with the self-help author.

Claire and Phil think that they have the best relationship than the other two couples. They believe their marriage is solid and there are no real issues between them. Mitch and Cam know that their marriage is unconventional so their approach during the session is not to talk too much so they aren’t considered the sideshow couple of the session. As for Gloria and Jay, Jay is not happy that he had to miss his football game to attend a counseling session. Jay has a plan of his own to get out of the session. He pretends to talk about his childhood, becoming emotional and leaves the room. Everyone thinks he is overwhelmed by his emotions but he is actually watching his game. Gloria is less than thrilled with Jay and makes him join the session again.

Related: Modern Family Season 7 Episode 6- The More You Ignore Me

Dr. Radcliffe has everyone make a list of the things that annoy them about their partner. Claire is convinced that Phil won’t have anything to say about her, so she doesn’t write anything about him. However, she is shocked when Phil says that she tells corny jokes, some of her expressions are annoying, and they need to work on their quality time in the bedroom. Gloria says the fact that Jay doesn’t express his emotions is frustrating, and Jay says that Gloria is too loud all the time. Mitch and Cam also express that they both have things that each other could work on in the bedroom, which freaks out the other two couples.

Suddenly, the therapist is called to a family emergency, and the three couples are left to settle everything on their own. Jay finally lets his emotions start to fly, talking about events that have happened in life that still affect him today. Everyone is shocked by Jay’s admissions, but Gloria is happy that her goal to get him to be more expressive with his feeling has been accomplished. After that, everyone else calms down, and they start to convey their appreciation for each other.

Meanwhile, Alex and Haley are spending time together bonding. Alex tells her sister about Rueben, a dorky kid at her school that she calls her boy toy. But, she says that he worships the ground she walks on and that’s pretty much the only reason she’s dating him. Hayley tells her sister about how she and Andy recently hooked up. Both, Alex and Hayley decide to cut all ties with Rueben and Andy. They both meet up with the two guys. Alex has called things off with Reuben, but things don’t exactly go as planned for Hayley. She lies to Alex that she broke it off with Andy but the truth is that Andy tells Hayley that things would have been different if he and Beth were not engaged. The two of them kiss and end up in bed together.

Next week on Modern Family:

In hopes of the perfect white Christmas she never had in Columbia, Gloria rents a cabin in the mountains for the whole family, including Andy (guest star Andy DeVine), to celebrate the Christmas holiday. Unfortunately when they get there, it’s anything but; with unseasonably hot weather and a random unwelcomed guest (guest star Andrea Martin), the family is in for an unusual holiday celebration!

Did you catch Modern Family, Season 7, Episode 8: Clean Out Your Junk Drawer? What were your favorite moments from the show? Tell us below!