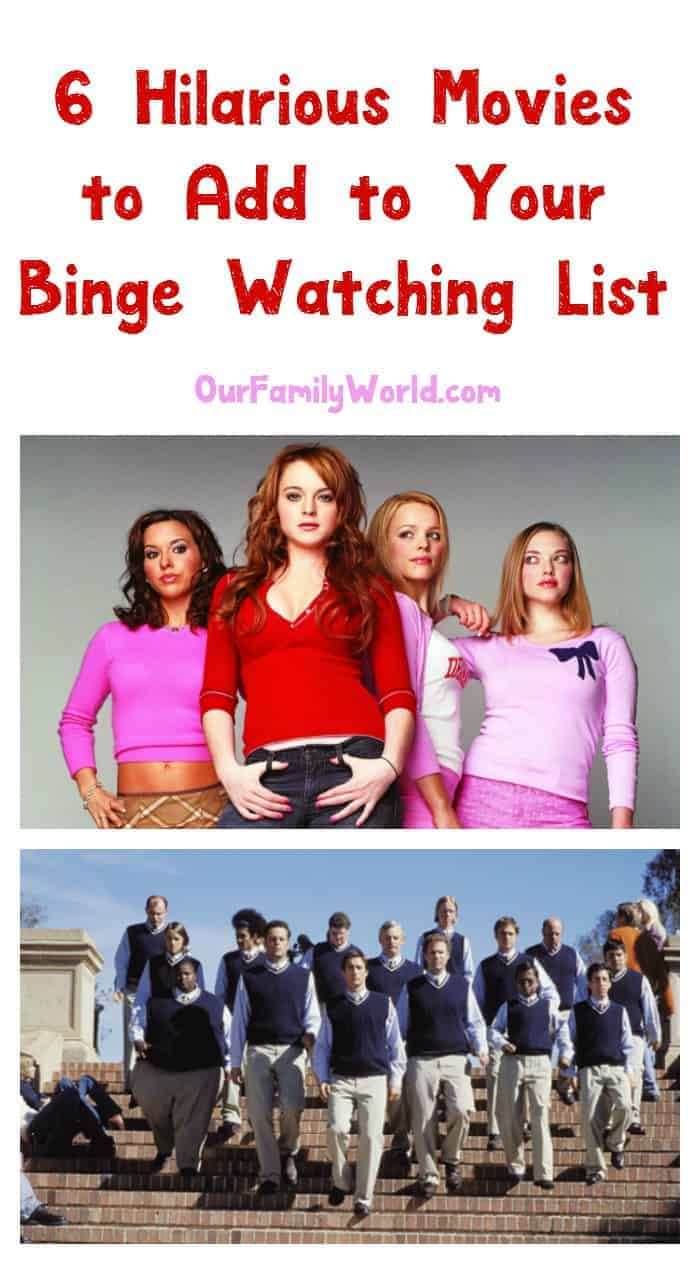 Laughter truly is the best medicine – it has been shown to have all kinds of health benefits the more we do it, including a stronger immune system; a reduced level of stress; and even helps the body relax.  So what better reasons to sit down at the end of the day, and watch one of these hilarious movies to help you relax? Keep in mind that some of these are best watched after the kids go to bed!

Related: 7 Rainy Day Movies To Add To Your List

is rude, a bit crude and hilarious from beginning to end!  This is the story of newly separated Mitch, and his friends Frank and Beanie; men in their thirties who attempt to recapture some of their youth by turning Mitch’s house into a fraternity at their old college.  For those of us who like to guffaw like teenagers from time to time, this movie will most definitely fit the bill!

is the coming of age story of Cady, a naive new student at the local high school.  She befriends The Plastics, a group of Mean Girls, who turn on Cady in the blink of an eye when she falls for Queen Bee Regina’s ex-boyfriend.  Cady vows revenge, until she finds herself having become a mean girl herself.   A story about friendship and remaining true to yourself, this movie is a must see!

The first time I saw Airplane

as a kid, I’ll admit that I didn’t understand all of the humor.  I’ve since re-watched it again and again, and still laugh hysterically every single time.  When an airplane crew are struck by food poisoning, it is up to a former war pilot to land the plane safely.  This film helped launch Leslie Neilson’s comedic career, and helped define slapstick comedies… so do yourself a favor, and watch this movie pronto!

Monty Python And The Holy Grail

Follow King Arthur in 10th century England, as he travels the countryside looking for knights to join him at the Round table in Camelot.  Along they way, they encounter the Voice of God, who send them on another quest: The search for the Holy Grail.  As ridiculous as it is hilarious, don’t miss this classic silly comedy

Anchorman: The Legend Of Ron Burgundy

(played by the hilarious Will Ferrell) in the male-dominated  world of broadcasting.  Burgundy is on top of the world, until a driven ambitious woman (played by Christina Applegate) is hired as a new anchor.  With a supporting cast including Seth Rogen, Steve Carell and Chris Parnell (to name but a few), this movie is a must-see!

With a spectacular cast including Rodney Dangerfield, Bill Murray and Chevy Chase, this classic movie still packs a comedic punch every time.  Follow the endless hijinks at Bushwood Country Club, and be prepared to laugh out loud time and time again!

I hope you enjoyed my list of hilarious movies to help you relax!  What are some of your favorite comedy movies?