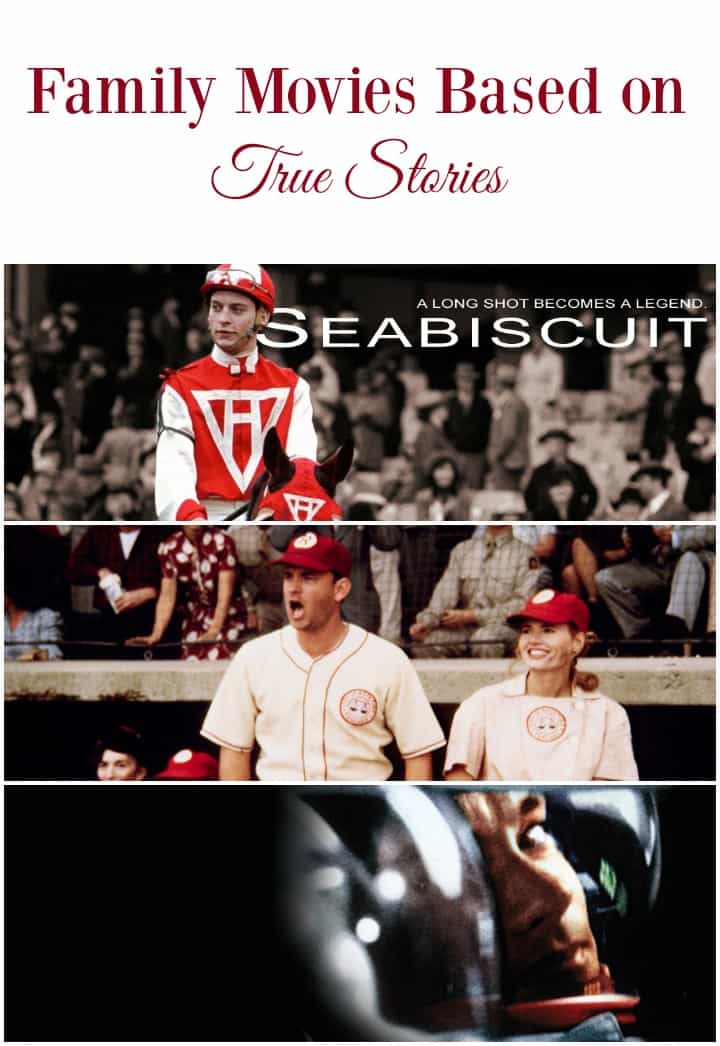 Watching good family movies based on true stories is a great way to teach kids about life. I usually use these movies as a trigger to explain some sad-joyful realities of life. And this is what parenting is about. We use everyday life, movies, shows to teach kids. Obviously we need to take into consideration their age group. We cannot teach a 3-year-old about adult relationship, but we can teach a 14-year-old about the importance of hard work, studying, etc, while having a nice family time around a movie.

Here are some good family movies that are based on true stories and that can teach kids some interesting facts!

Seabiscuit is a 2003 biographical sports psychological drama thriller film starring Tobey Maguire, Jeff Bridges, Chris Cooper, Elizabeth Banks, Gary Stevens and William H. Macy. The movie is loosely based on the life and racing career of Seabiscuit, a thoroughbred race horse. It is also based on the 2001 non-fiction book titled Seabiscuit: An American Legend by Laura Hillenbrand. The movie is centered on Seabiscuit’s jockey, trainer, and owner, who work as one to get the race horse to some symbolic victories. What does this movie teach? Hard work is key to get where you want to get.

A League of Their Own-

A League of Their Own is a 1992 comedy drama movie starring Tom Hanks, Geena Davis, Madonna and Lori Petty. The movie is a fictionalized account of the real-life All-American Girls Professional Baseball League. During the time of WWII, many jobs were filled by women since most of the men were fighting the war. Since baseball team owners didn’t want the sport to be at a standstill, women were used to form teams. Dottie and her sister Kit are on the same group, but events occur that make Kit feel like she is living in the shadows of her sister. This can teach kid about team work and gender equality.

Apollo 13 is a 1995 historical docudrama starring Tom Hanks, Kevin Bacon, Bill Paxton, Gary Sinise and Ed Harris. The movie dramatizes the real-life events of the 1970 Apollo 13 lunar mission that was aborted. The words heard around the world are still felt today: Houston, we have a problem. These words were echoed during the tense days of 1970 during the mission of Apollo 13. This mission is led by an experienced crew and while things start out as planned, something goes horribly wrong. The astronauts struggle with the possibility of dying, the Mission Control leader does everything in his power to make sure they all come back home.

How about you? Do you use Family Movies Based on True Stories to discuss important topics with kids?

7 thoughts on “Good Family Movies Based on True Stories”