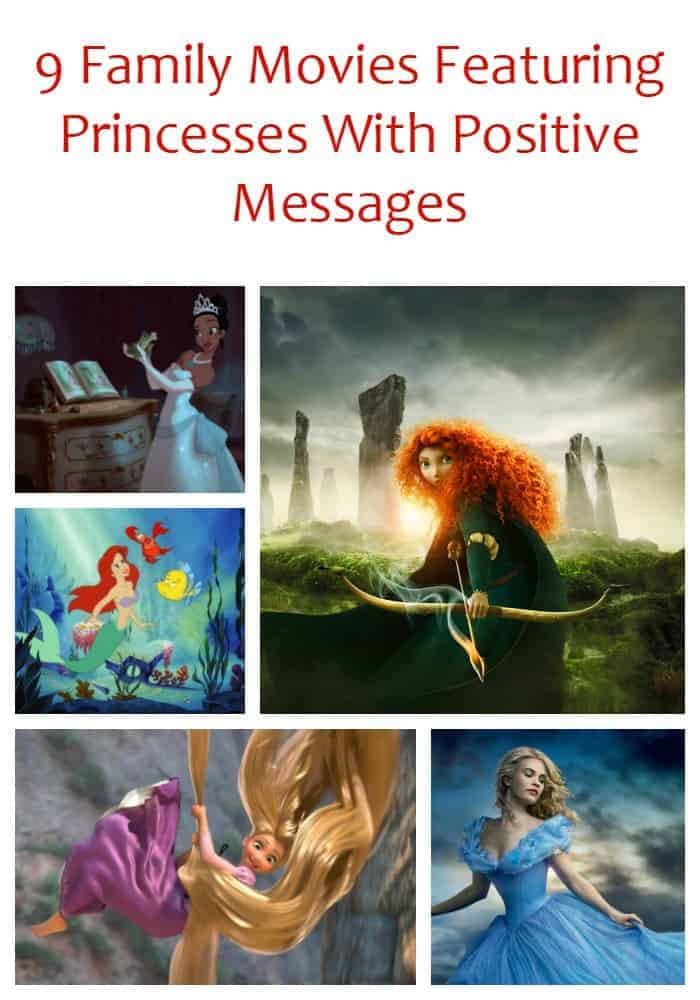 Just about every girl dreams of being a princess, right? While we may not live fairy tale lives, watching good family movies about princesses is the next best thing! There’s definitely no shortage of princess movies, but finding films that the whole family can enjoy is a bit challenging. We also want our girls to have good role models, princesses who stand for something. We’ve rounded up a few good family movies about princesses that also make good role models by the end of the film. Check them out!

is a 1989 animated musical fantasy movie that is based on the 1837 Danish fairy tale by Hans Christian Andersen. The movie features the voices of Jodi Benson, Christopher Daniel Barnes, Pat Carroll, Samuel E. Wright, Jason Marin, Buddy Hackett, Kenneth Mars and Rene Auberjonois. Ariel is a 16-year old teenager who is rebellious, as many teenagers are. She loves to visit the land, which King Triton, her father, forbids. During one of her land visits, Ariel falls in love with a human prince. She wants to be with him so much that she made a deal with Ursula, a sea witch, making Ariel human for three days. However, things don’t go as planned and King Triton must make the ultimate sacrifice for his daughter Ariel.

While on the surface, it seems like Ariel is willing to give up everything for a guy she’s never even met (let’s be honest, we’ve all thought it!), through her journey we discover a girl who isn’t afraid to explore beyond her own little world. She’s brave enough to follow her own dreams. That’s a good message for our kids!

is a 2012 3D computer animated fantasy comedy film starring the voices of Kelly Macdonald, Billy Connolly, Emma Thompson, Julie Walters, Robbie Coltrane, Kevin McKidd and Craig Ferguson. Merida is the daughter of King Fergus and Queen Elinor and she is also a skilled archer. Merida wants to carve her own life’s path, so she defies a custom that is many years old and sacred to the lords of the land. However, her defiance unleashes chaos so to fix her mistake, she seeks out an elderly eccentric witch, who grants her a wish. What takes places next will show Merida the true meaning of bravery. Can she undo this horrible curse before it is too late?

Merida is an all-around good role model because she’s strong and kind, determined to follow her own path and stands for change. Of all the good family movies about princesses, Brave really stands out as being the one you want to use as an example for kids! If your kids love the movie so much they want a whole party theme around it, check out these awesome Brave party games for kids!

is a 2015 romantic fantasy film that is not an exact remake of the 1950 Walt Disney Cinderella film but some elements are taken from the film. The movie is based on the 1697 folk tale of the same name by Charles Perrault. Cinderella stars Lily James, Cate Blanchett, Richard Madden, Sophie McShera, Holiday Grainger, Helena Bonham Carter, Stellan Skarsgard and Derek Jacobi.

This version of Cinderella, showcases the life of Ella. After her mother passes away, Ella’s father marries again and Ella is welcoming of her new stepmother as well as her two stepsisters. However, Ella’s father suddenly passes away, leaving Ella with a mean and cruel family, who treat her like a servant instead of part of the family. In the woods one day, Ella meets a charming man, unaware he is a prince. Ella wants to attend the ball with her new prince, but she is forbidden to do so by her stepmother. With the help of a kind woman, a pumpkin and some mice, Cinderella’s life will be forever changed.

Cinderella faces harsh criticism from many directions. Like the Little Mermaid, on the surface we have a story about a girl who falls in love with a guy after just one dance. It’s a fairy tale, that’s just the way it happens! Love at first sight and all. Dig deeper, though, and we have a girl who never, ever loses her positive attitude and kindness, no matter what life throws at her. She makes lemonade out of the bitterest lemons. If that isn’t a positive message, I don’t know what is!

More good family movies about princesses who stand for something

By choosing good family movies about princesses with strong characteristics and a positive message, you can show your children that the true magic of a fairy tale comes from within.

Do you have any favorite good family movies about princesses? Tell us in the comments!