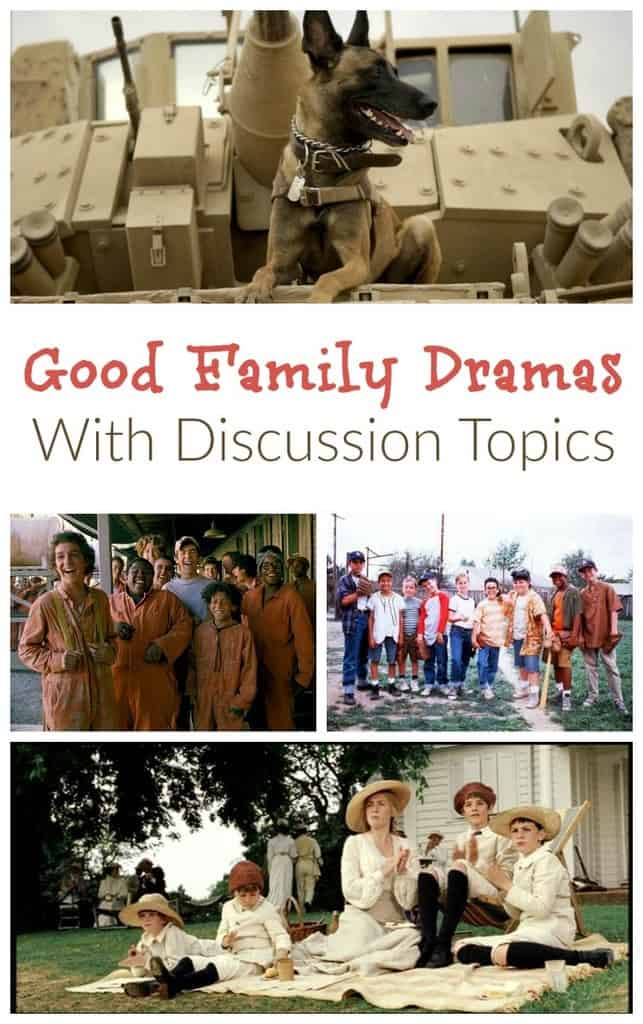 Watching good family drama movies together is a great way to help your kids learn more about empathy, compassion and even some difficult life situations in a way that’s easier for them to understand. I always find that my son is so full of questions after we watch a heartfelt drama. Even if it’s not a super serious movie, dramas offer kids a view of how others live..even if they are, well, dramatized. Check out four good family drama movies that leave a lot of room for open-ended discussion after the credits roll.

Finding Neverland is a 2004 semi-biographical film starring the incredibly talented Johnny Depp, Kate Winslet, Julie Christie, Radha Mitchell and Dustin Hoffman. The movie is about J.M. Barrie, the creator of Peter Pan. Finding Neverland details the life of Barrie, from his beginnings to his writing his famous classic story. His inspiration for the story was centered on four children who had no father; four kids that don’t want to grow up.

This family drama opens up so many possibilities for discussion! Talk to your kids about Barrie’s life, what they learned about the author. You can also talk to them more about the themes of Peter Pan itself and how they feel about the story now that they know more about the author. If you’re a single parent, you can use the story to open up a discussion about your kids’ feelings about not having their other parent present. I’m a single mom, and my son has always been so closed up about his absent father, yet through good family drama movies like this, I can often tell how he’s feeling based on his reactions to the characters and themes.

Holes is a 2003 adventure comedy-drama film starring Shia LaBeouf, Sigourney Weaver, Jon Voight, Patricia Arquette and Time Blake Nelson. The movie is based on the 1998 book of the same name by Louis Sachar. One hundred years ago, a young lad named Elya forgot to repay Madame Zeroni and he was told the words, “But if you forget to come back for Madame Zeroni, you and your family will be cursed for always and eternity.” From that day forward, Elya and his family have faced nothing but bad luck.

Now, Stanley, Elya’s great-great grandson is accused of stealing the cleats from a major league baseball player and is shipped off to Camp Green Lake, where it never rains. To build the character of the inmates, they are each given the task of digging one hole. When an inmate digs up an artifact from Kissin Kate Barlow, the warden forces the inmates to work overtime digging. This leads Stanley to believe the warden is in search of something. But, just what is the warden looking for and how does it connect to the curse that Stanley’s family had endured?

Holes is one of those good family drama movies that opens up some deep themes for discussion! Talk to your kids about the power of fate versus free will. Throughout the film, it actually seems like fate is the driving force behind everything that happens to Stanley, which is why he believes so strongly in the curse. But could his decisions have anything to do with it? What about in our lives? The theme of adult bullying is also powerful throughout Holes. Take the opportunity to talk to kids about what to do if they see a teacher or authority figure abusing their power.

The Sandlot is a 1993 coming-of-age baseball comedy film starring Tom Guiry, Mike Vitar, Patrick Renna, Chauncey Leopardi, Marty York, Brandon Quintin Adams, Grant Gelt, Shane Obedzinski and Victor DiMattia. Little Scotty and his family move to a new city, where he decides he wants to play baseball. When one of the neighborhood baseball gurus take Scotty under his wing, Scotty becomes part of the local baseball team. They encounter all kinds of stuff but what happens when they are forced to deal with The Beast, a legendary ball-eating dog?

When the Beast destroys a super famous baseball signed by Babe Ruth, the team has to work together to figure out how to make it right. Along the way, they learn some precious lessons about each other and about how appearances are not always what they seem.

This is probably one of the most popular good family drama movies for middle-grade kids. I remember my brother watching it over and over when it came out. He still watches it whenever it’s on TV! The Sandlot opens up many themes. In my opinion, though, the most important lesson comes from what they learn about Mr. Mertle and “The Beast”: you shouldn’t judge someone (or a dog!) before you get to know them.

Max is a 2015 film starring  Thomas Haden Church, Josh Wiggins, Luke Kleintank and Lauren Graham. The story follows Max, a Belgian Malinois Marine dog that lost his handler Kyle in Afghanistan. Max suffers from PTSD and misses Kyle terribly. When he’s brought to Kyle’s funeral, he sees the Marine’s younger brother, Josh, a somewhat troubled teen. For the first time since losing Kyle, Max settles down for a moment. The movie follows the developing bond between Max and Josh, as well as the difficulties that Josh has with his father.

I watched Max with Jacob (age 10), and cried through the whole beginning! As a former Navy wife and part of a large military family, when I saw those officers coming to the Kyle’s mom’s door, I started bawling. This opened up an opportunity to talk to Jake about the sacrifices made by both military members and their families. Later in the movie, when the bad guys were in a field of notorious plants, Jacob and I had a frank discussion about drugs. We also talked in depth about kindness towards animals and PTSD.

Good family drama movies like these both entertain and open up a world of possibilities for discussion. The key is to choose entertaining films that engage your entire family. You want your kids actually to enjoy the movie. Otherwise, the life lessons won’t sink in. Make the discussion time fun too. Ask open-ended questions about their thoughts on the film, working in the topics that you want to explore. You could even make it part of your tradition, sort of a round-table post-film discussion.

What are your favorite good family drama movies? Can you think of any other themes for discussion from these four flicks? Tell us in the comments!