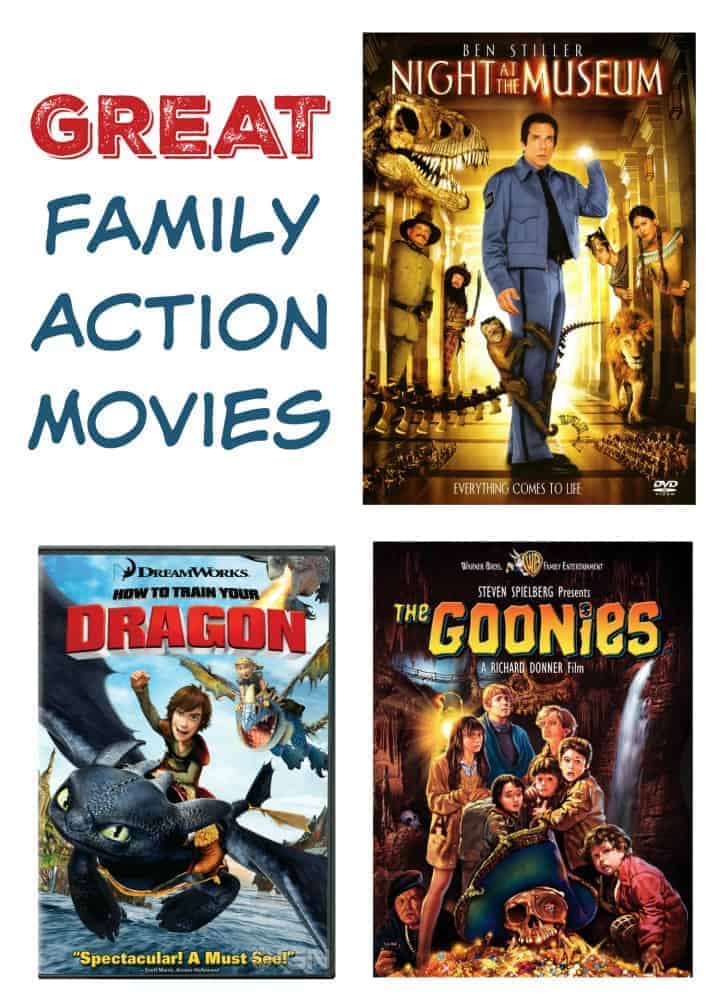 In my pursuit of finding good family movies for this upcoming holiday season, I thought it would be a great idea to have a list of good family actions movies. The following movies are suitable for a younger crowd. They won’t have nightmares after. They were picked by my 8-year-old daughter who loves watching action movies. They are even teen approved. My 14-year-old son loves them. It’s not easy to find movies that interest an 8-year-old and a 14-year-old at the same time.  The following movie list will sure do.

Good Family Movies from the 90’s

Night at the Museum-

Night at the Museum is a 1993 adventure comedy starring Ben Stiller, Carla Gugino, Dick Van Dyke, Mickey Rooney, Bill Cobbs and Robin Williams. This good actions family movie is based on the 1993 book of the same name by Milan Trenc. Larry takes a job as a night watchman at the Museum of Natural History, after being unemployed, close to eviction and a disappointment to his son. He replaces three elderly men who have retired. However, Larry soon realizes that when the sun goes down, the statues come to life. He discovers that an Egyptian stone is responsible for this occurrence. When the three retired elderly men try to steal the stone, Larry and the historic statues bond together to save the museum.

The Goonies is a 1985 adventure comedy starring Sean Astin, Corey Feldman, Ke Huy Quan, Josh Brolin, Jeff Cohen, Kerri Green and Martha Plimpton. Mikey and his friends come across an old map in his attic, a map that leads to hidden treasures. The group sets off to find the treasure, encountering some obstacles along the way, like the evil Mama Fratelli. Can the group beat Mama Fratelli to the treasures? What will happen once she catches Chuck, can his friends save him? It’s my daughter favorite family action movie.

How to Train Your Dragon-

How to Train Your Dragon is a 2010 3D animated action fantasy starring the voices of Jay Baruchel, Gerard Butler, Craig Ferguson, America Ferrera, Jonah Hill, T.J. Miller, Kristen Wiig and Christopher Mintz-Plasse. Hiccup, a young Viking living on the Island of Berk, wants to help others in his town fight off the dragons. But, his father, the leader of the village, will not allow him to join in. Hiccup decides to adventure out on his own and comes across a Night Fury dragon, one that he downs but refuses to kill. He names the dragon Toothless and the two to form a friendship, both of them discovering each other’s world. What happens when Hiccup discovers that dragons may not be as bad as everyone makes them out to be?

Which of these good family actions movies did you watch? Which one is your favorite?