Looking for A Wrinkle in Time movie quotes & trivia? Check out some of our favorite lines and awesome facts from this epic family movie, plus everything you want to know about the cast! 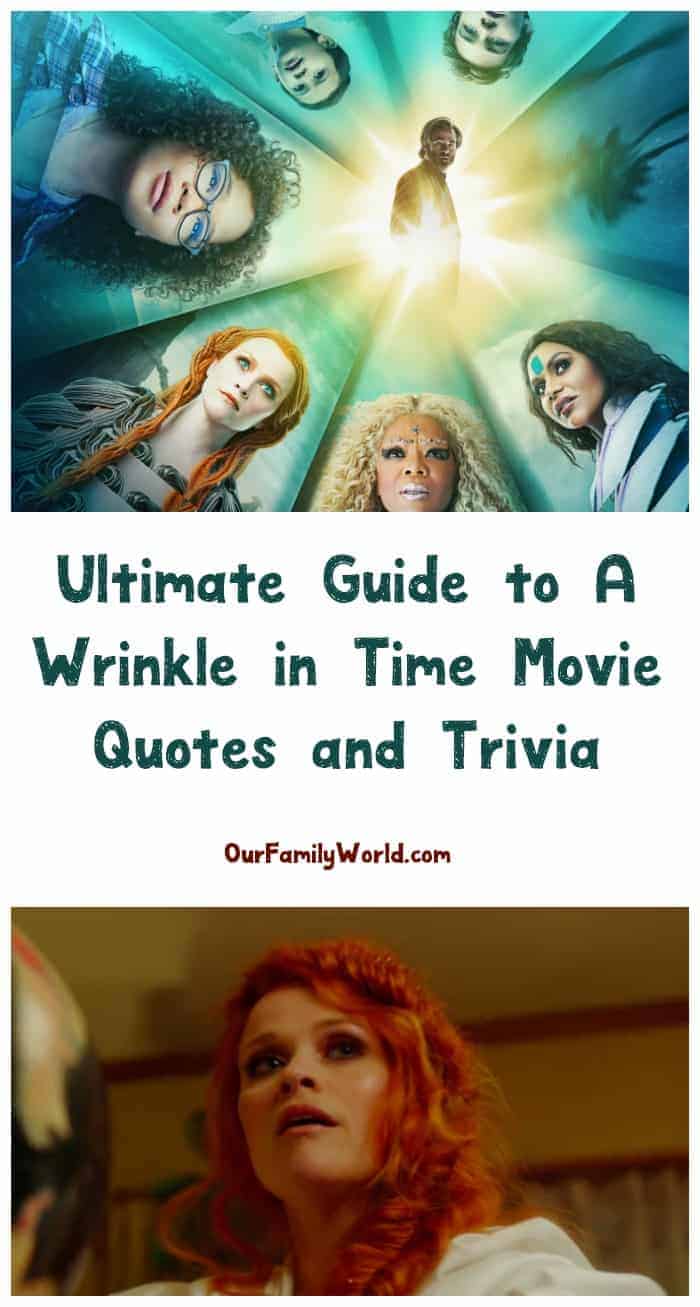 I can’t even tell you how excited I am about the reboot of A Wrinkle in Time! Madeleine L’Engle’s book was one of my favorites as a kid, and I loved the 2003 Disney version (even if it didn’t get high ratings from many critics). The upcoming movie, which releases into theaters on March 9, 2018, looks like the perfect adventure/science/fantasy flick for the whole family.  Here are some awesome movie quotes and movie trivia from A Wrinkle in Time, plus everything you want to know about the stellar cast!

If you haven’t heard of the A Wrinkle in Time movie, let me tell you what it’s all about. When Meg’s scientist father mysteriously vanishes, three strange beings show up to send her, her brother, and her friend into space to find him. As mentioned above, it’s based on the award-winning 1962 book by the same name. Check out the trailer:

A WRINKLE IN TIME MOVIE QUOTES

1. Mrs. Which, as a voiceover in the movie trailer, talking to Meg Murry-

Mrs. Which- “Close your eyes. See with mine.”

Principal Jenkins- “You were a top student, but look at you now. You can’t keep using your father’s disappearance as an excuse to act out.”

Kate- “Imagine that the ant here wants to get to her other hand.” (referring to a toy in Meg’s hand)

Meg- “The quickest option is to walk across the string.”

Kate- “But it turns out a straight line is not the shortest distance between two points. Not if you use a fifth dimension.”

Meg- “It’s outside of the rules we know of time and space. So, the ant arrives in my hand instantaneously.”

An evil is near. Watch a new sneak peak of #WrinkleinTime. pic.twitter.com/tdxBwyREA6

4. Conversation between Meg Murry and Mrs. Which, regarding the disappearance of Meg’s father, Dr. Alex Murry-

Mrs. Which- “We heard a cry out in the universe.”

Mrs. Which- “We believe he is and we’re here to help you find him.”

5. Conversation between Mrs. Which, Mrs. Whatsit, Mrs. Who and Meg Murry-

Mrs. Which- “We are in search of warriors.”

Mrs. Whatsit- “Warriors who serve the good and the light in the universe.”

Mrs. Which- “Your Father’s trapped by an evil energy.” (talking to Meg)

Mrs. Which- “And the only one who can stop it is you. Be a warrior.”

6. Dr. Alex Murry, as a voiceover in the movie trailer-

Alex- “My love is always there, even if you can’t see it.”

7. Tagline, in the movie trailer-

“The only way to defeat the darkness is to become the light.”

A WRINKLE IN TIME MOVIE TRIVIA

12. Wondering who did the cover of Sweet Dreams (Are Made of This) in the first trailer? You can thank Keeley Bumford for the gorgeous rendition!

A Wrinkle in Time Cast

A Wrinkle in Time has a truly outstanding cast filled with some of the most talented actors in Hollywood. Let’s take a peek at a few!

If you’ve owned a television at any point in the last 20 years, you know who Oprah is! Along with her popular daytime show, she’s also appeared in over two dozen shows and movies. Your kids will recognize her as the voice of Eudora in “The Princess and the Frog,” Gussy the Female Goose from “Charlotte’s Web,” and Deborah in “The Star.”

A long-time favorite of mine for her work in movies like “Man in the Moon” and “Sweet Home Alabama,” Witherspoon isn’t new to the family movie category. She played Susan Murphy / Ginormica in “Monsters vs. Aliens” and Rosita in “Sing.”

While Mindy Kaling is best know for her role as Kelly Kapoor in the comedy series “The Office,” she’s no stranger to children’s movies, either. She played the voice of Disgust in “Inside Out” and Taffyta Muttonfudge in “Wreck-It Ralph.”

Fans of the Doctor Who series will recognize Gugu as Tish Jones (2007), but your kids know her better as Plumette from the live-action Disney hit “Beauty and the Beast.” Gugu is also pretty well known in the theater world. She’s played Juliet (Romeo & Juliet) at Manchester’s Royal Exchange Theatre in 2005 and Ophelia (from Hamlet, opposite Jude Law) at London’s West End and Broadway in 2009.

Micheal Pena’s had some pretty diverse roles over the years, going from Armando Renta in the cop show “The Shield” to Grubber in “My Little Pony.” LEGO Ninjago fans will recognize him as the voice of Kai.

For such a young actress, Storm has definitely played some BIG roles! She caught her break when she was cast to play Emily in “12 Years a Slave.” Your kids might recognize her as Avery from The Thundermans.

Although he’s best known for his roles in adult comedy movies, Zach isn’t exactly brand-new to family film roles. Like Pena, he voiced one of the main characters in a LEGO movie. He played Joker in The LEGO Batman Movie.

Fans of the JJ Abrams Star Trek franchise will recognize Pine instantly. He’s pretty unforgettable in the role of Captain Kirk. Your kids, on the other hand, know him as the voice of Jack Frost in “Rise of the Guardians.”

At just 16 years old, Levi Miller doesn’t have a long acting resume quite yet, but your kids might recognize him as Peter in the 2015 movie “Pan.” The young Australian is definitely one to watch!

Young Rowan has only performed in a few roles, yet already has a huge following. Fans of “Girl Meets World” will instantly recognize her. She plays Riley Matthews, daughter to Cory and Topanga.

With such an outstanding cast and amazing special effects, A Wrinkle in Time is definitely the must-see family movie of the year! I’ll be heading out to theaters as soon as it opens!

Are you planning to take your family to see this one? Have you heard any other interesting A Wrinkle in Time movie quotes or trivia? Share below!