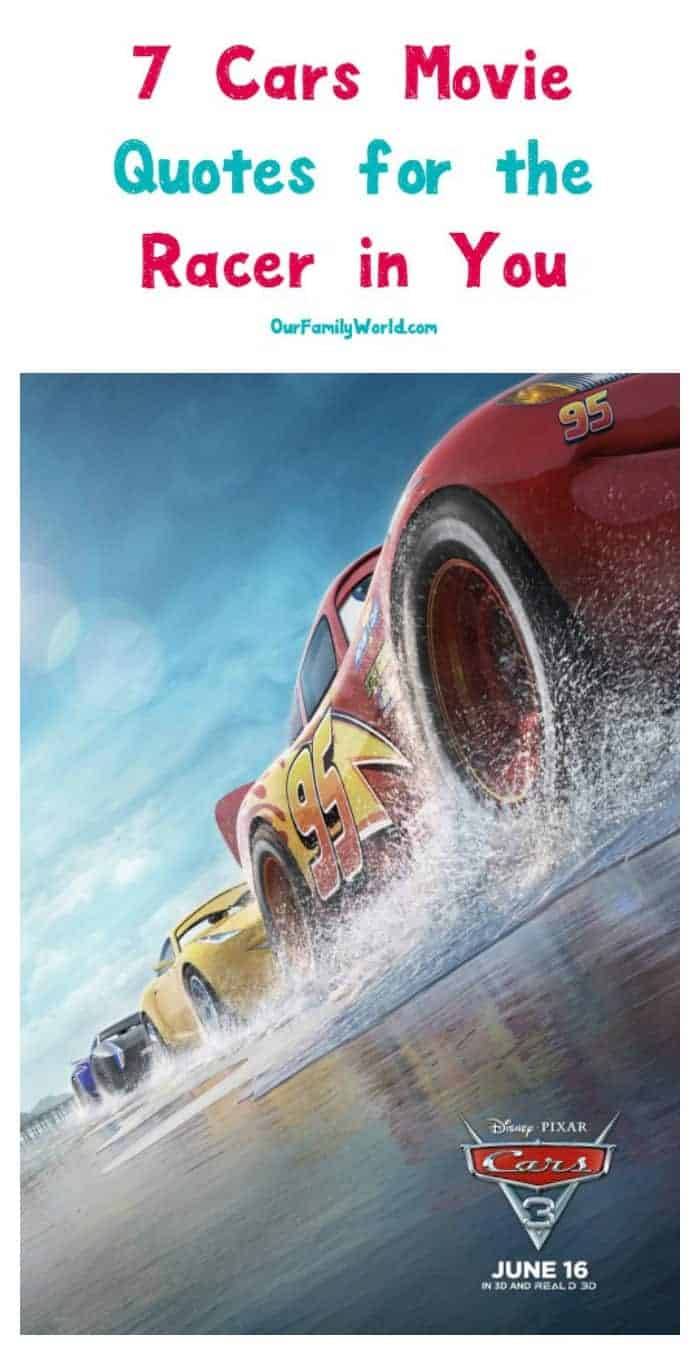 If these 7 Cars 3 movie quotes don’t inspire the racer in all of us, I don’t know what will! If you haven’t heard the exciting news, Lightning McQueen is back with all his friends for the race of a lifetime. Disney is releasing their 3rd installment in the insanely awesome and popular Cars franchise on June 16th, 2017. That’s just over a month away! While you’re waiting, get a sneak peek through these thrilling Cars movie quotes from all three movies!

Smokey, as a voiceover the movie trailer, talking to Lightning McQueen:

Smokey- “You’ll never be the racer you once were. You can’t turn back the clock, kid, but you can wind it up, again.”

Smokey is the former mechanic of Doc Hudson. The character was inspired by the real-life NASCAR mechanic, Smokey Yunick. The role is voiced by actor Chris Cooper.

Reporter, as a voiceover in the movie trailer:

Reporter- “Jackson Storm is part of the next generation of hi-tech racers.”

Jackson Storm is part of a new class of fast-racing rookie racecar drivers. The role is voiced by actor Armie Hammer.

Race announcer, as a voiceover in the movie trailer, talking about rookie racer, Jackson Storm:

A conversation between Uncle Topolino and Lightning McQueen:

McQueen- “What does that mean?”

Topolino- “Whoever finds a friend, finds a treasure.”

Uncle Topolino is the uncle of Luigi, the owner of Casa Della Tires in Radiator Springs. The role of Uncle Topolino was voiced by actor Franco Nero.

Finn McMissile is a British secret agent, who recruits Mater to be part of his mission, after believing Mater is an American spy.

Chick- “The Piston Cup? It’s mine, dude. It’s mine. Hey, how do you think I’ll look in Dinoco Blue?”

McQueen- “In your dreams, Thunder.”

Chick- “Thunder? What are you talking about?”

Doc Hudson is a legendary, retired racecar driver, currently the medical doctor and judge in the little town of Radiator Springs. During his racing career, Hudson won 3 Piston Cups: 1951, 1952 and 1953. The role of Doc Hudson was voiced by actor Paul Newman, who died from lung cancer, at the age of 82, on September 26, 2008.

Have you heard any other awesome Cars 3 movie quotes? What are your favorite lines from the first two movies? Share below!