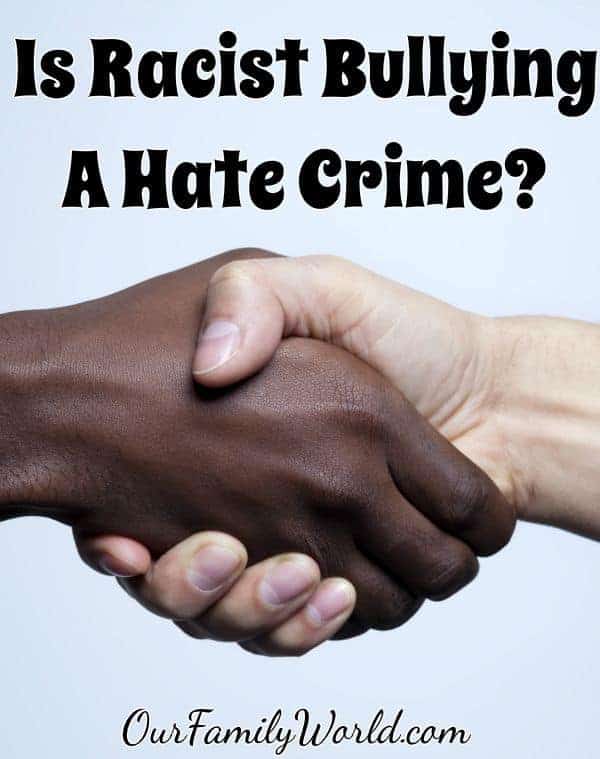 While we mention bullying regularly, we have not approached the question Is Racist Bullying A Hate Crime?  There is no other answer than to say yes, but there are many factors of racism and racist bullying to consider.  Racism is never okay, but it becomes even more difficult to accept when it is a form of bullying with our children.

IS RACIST BULLYING A HATE CRIME?

Bullying about appearance.  We aren’t just talking about the color of skin in this.  Many children are bullied about appearance because of things like hair texture and body types.  While not everyone of color has curly hair or a fuller figure, many do.  Girls of color will often be the target of more bullying by other races when it comes to being picked on regarding their hair, shape of their nose, lips or figure.

Bullying about social class.  Unfortunately, minorities tend to be in situations where they are struggling to be above poverty level.  Being bullied for being poor is common amongst all societal groups, but can be even more prevalent in those of minority race.  The struggle to pay for things like education, transportation and basic living expenses can often lead to a child of color being bullied more than there Caucasian counterparts.

Bullying about stereotypes.  Unfortunately racism continues to build stereotypes in our society.  As a result, racist bullying has continued to become an issue.  Bullying is not just something that happens to those who are seen as not as pretty or smart.  Bullying happens because you or your family fits into a specific category that to some is unsavory.  In racist bullying it can happen because your race is one that is viewed as inferior and in a stereotype that is unsavory.

Educate your children on the fact that being of a different race is not a bad thing.  We are all different and have wonderful things to give to the world.  The color of your skin, religion or country of origin have nothing to do with your value as a human being.

Do you think racist bullying is a hate crime? Should it be punished differently than other types of bullying?

23 thoughts on “Is Racist Bullying A Hate Crime?”