Do school uniforms reduce bullying? Today we’re going to take a look at some of statistics, as well as arguments for and against uniforms to find out if strict dress codes really do protect kids. 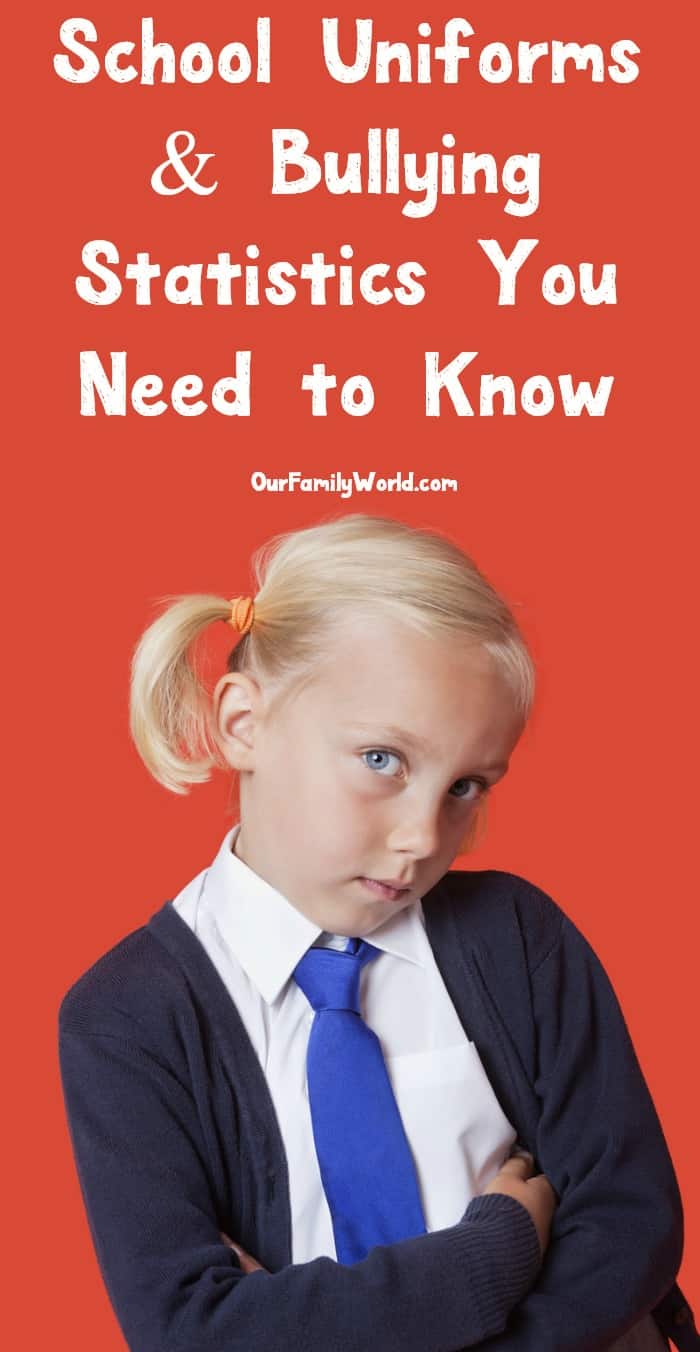 To understand whether school uniforms reduce bullying, we have to understand why kids get bullied in the first place. Bullying in schools is frequently happening and often takes place right under our nose. It often starts off slowly, then increases as the bully figures out that his words or actions can get to his victim.  It can begin out subtle with a comment, a look, or mean-spirited laughter that leaves a kid’s self-esteem in a puddle.

Often, those mean-spirit comments focus on the victim’s overall looks, including what they are wearing. For example, more affluent girls wearing designer clothing may pick on another girl who can’t afford fancy clothes. Many public schools across the US feel like they’ve come up with the perfect solution: stick everyone in the same outfits! Does it really work, though? Let’s find out!

Do School Uniforms Reduce Bullying: Statistics You Need to Know

What Are the Chances Your Kid Will Experience Bullying?

Let’s start with some basics. How many kids are really being bullied? How do we help our children avoid being bullied? Some of the bullying statistics according to a national survey reported on Greatschools.org  are staggering. Here are some of the highlights:

So, we know bullying is obviously a big issue with schools and parents looking for answers!  Uniforms are one of the tactics that some schools are trying. Those who are for school uniforms believe that they create equality. If everyone is wearing the same outfit, then no one can use clothing to isolate or pick on another student.

Not everyone agrees with this move, though.  Both parents and students have mixed responses when asked “Do School Uniforms Prevent Bullying?”

Experts also have mixed feelings. Tony Volk, an associate professor at Brock University, has done extensive research on the subject. According to his studies, he found that there is no evidence that school uniforms reduce bullying statistics. Like many, he feels that bullies will simply find another way to judge status.

See, parents and students who are against uniforms argue that while clothing definitely CAN come into play during bullying, it’s only a tiny piece of the puzzle. Bullies choose their victims by finding a target that will give them the most gratification. Someone that will respond to their taunts and teasing, someone who will make them feel bigger and more powerful. A girl wearing last year’s jeans who simply doesn’t care what others think of her isn’t a good target. On the other hand, a girl could be wearing all the right trends and still be a target because she provides the bully with the gratification of reacting to teasing.

What Do Schools Think About School Uniforms?

More and more public schools are jumping on the school uniform trend. The National Association of Elementary School Principals reports that 49% of elementary schools either have a uniform currently or have a plan to implement school uniforms

Principals in Elementary schools with a uniform policy overwhelmingly feel that it has made a positive impact on some of the following issues in their school:

A school district in North Jersey is reporting that implementing school uniforms is directly reducing bullying. At this school, even students are commenting directly that uniforms are decreasing bullying.

What Do Universities Say About School Uniforms?

There are other studies being conducted at various universities that find that uniforms are not directly impacting bullying or achievement. For example, I found several studies cited on Procon.org In a national survey of 10th graders, a sociology professor at Virginia Tech found: “”no effects of uniforms on absenteeism, behavioral problems (fights, suspensions, etc.), or substance use on campus” and “no effects” on “pro-school attitudes, academic preparedness, and peer attitudes toward school.” A similar study from a professor at Syracuse University in New York found no stats that showed uniforms and any achievement.

We’ve discussed what parents, schools, and even universities think about whether school uniforms reduce bullying, now let’s look at some of the statistics about uniforms.

As for hard statistics on whether uniforms reduce bullying, the jury is still out. The studies so far have been fairly limited in scope, focusing on one town or even a single school. One study in Long Beach, California, showed that uniforms reduced school crime by 36%.

On the other hand, a larger-scale study performed by the University of Notre Dame found that uniforms not only did nothing to reduce behavioral issues but actually had a negative impact on student achievements.

Many public schools only recently instituted uniform policies, so it will take some time to figure out the true impact and gather hard statistics.

What Do You Think About School Uniforms And Bullying?

I find the data and case studies on this issue show two sides of the story. On one hand, we have educators who are saying that uniforms are making a difference. On the other hand, we have experts who are telling us that the numbers don’t all necessarily add up. It is a trade-off, and while I am all for teaching students to prepare for the challenges of the workforce, I don’t know that restricting what they wear to a uniform is working based on the data above.

Do our educational leaders, such as principals, want to believe that uniforms are making a difference in bullying at schools, or do uniforms making a difference? Are the findings at universities spot on, or are school uniform and bullying research statistics influenced by something else? Tell me your thoughts in the comments!