In the debate over whether public schools should have uniforms, those in favor often claim that uniforms prevent bullying in school. After all, if everyone is wearing the same thing, no one can make fun of another child’s fashion choices, right? Let’s discuss how true that really is. 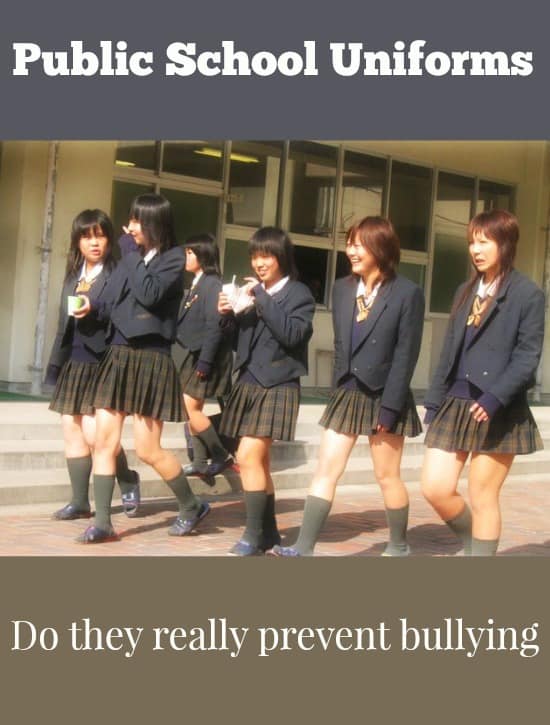 Let me be honest up front, I am very much against uniforms in public school. I’m extremely protective of my son’s individuality and freedom to express himself. I feel that uniforms tell children that they should all strive to be the same, which goes against every belief in my odd, self-constructed belief system. I’ll always be a punk-rock-girl at heart!

I went to public school for the first 8 years, then finished out high school in a private school, so I wore uniforms for the last four years of my school career. Back then, no public schools were wearing uniforms. I’ve been on both sides of the debate.

To me, the answer is a resounding no. When I was in private school, we were allowed to wear green tights under our skirts in the winter. K-Mart was the only place I could find them. When I came to school with my tights on, another girl asked where I got them. When I told her, she laughed at me and said she would wait until a more upscale store started selling them. I laughed and said “have fun freezing!” By that point, I was so used to people looking at me funny because of my hair style and taste in music that it didn’t really phase me anymore.

We all wore different shoe brands. We all carried different backpacks. We all had different binders, pencils, pens, notebooks, etc. When kids can’t pick on another student’s choice of shirt style, they’ll look for something else. A bully who wants to poke fun will find a way to do it. Unless every child is exactly the same right down to hair and eye color, there will be something to single out.

If you really think about it, fashion choices are just one of many causes of bullying. From what I remember and what I’ve seen in my son’s school now (they are the last school in the area without uniforms), fashion comes in far behind other risk factors for bullying.

One thing that really bothers me about the idea that school uniforms prevent bullying is that it sends a message to kids that being different is a bad thing. It tells them that rather than fight bullying on a deeper level, we’ll just throw a Band-Aid on it by making every child look similar. School uniforms do not prevent bullying. Parents, teachers and kids working together through bullying prevention programs and ongoing dialogue are the only ways to really put a stop to it.

Since this was about whether school uniforms prevent bullying, I didn’t really get into the other pros and cons of having uniforms in public school. I’ve heard it said that they save money on clothes, although I managed to buy my son’s entire wardrobe for the last year for under $100 through clearance sales. My mom used to pay about $200 a year for my uniforms. In our area, I rarely see uniform-style clothing on sale.

I’m sure there are other potential pros to public school uniforms. I know many people who absolutely love them. I’m obviously not one of those people, so if you want to weigh in on the pros, I’d love to hear your side! Perhaps in your area, school uniforms really do help prevent bullying. If so, tell me about it! I always read comments with an open mind.