Movies are a reflection of life, and the theme of bullying has been dealt with in literally dozens of movies.

The timeline below is a list of movies that I have seen that deal with bullying, though it is not the complete list.

It shows that the issue has been ongoing for several generations (in reality, probably for all generations), though the type of bullying has changed over the years.

We’ve included affiliate links to help you find these movies dealing with bullying in case you want to watch them with your family. 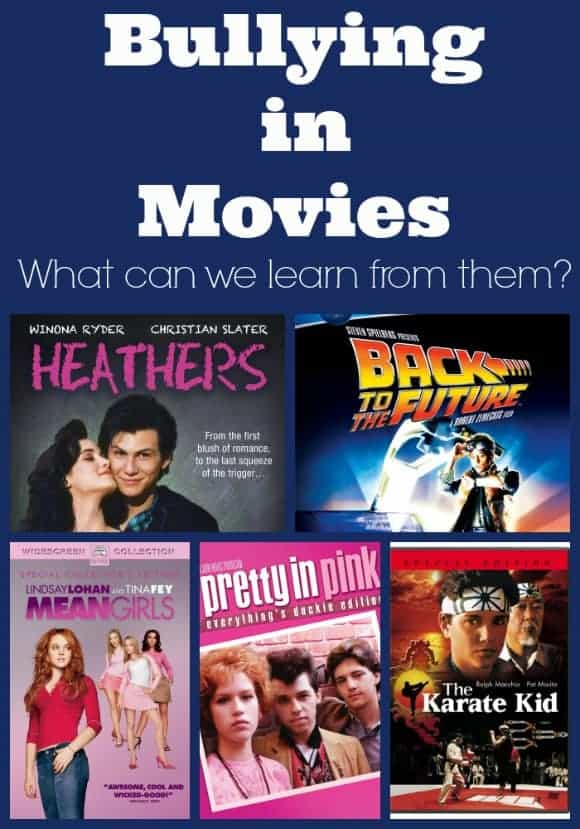 Back in the eighties the abuse was generally directed at boys and was physical in nature, at least as far as the moviemakers were concerned.  Pretty in Pink was one of the first movies to cast a girl as the victim, and the abuse was social and mental rather than physical, but it changed the face of on-screen bullying.  Indeed in Heathers and The Craft the bullied turn the tables by upping the stakes and find themselves in danger of becoming bullies.

Bullying is a timeless problem that, as a society, we have not put nearly enough thought into how we should deal with it.  Like crime and poverty, it will never disappear.   Therefore we must think of strategies that our children can use to deal with it…because the one common theme, other than bullying that appears in each and every one of these movies is that the bullied must deal with the problem.  Whether the lead character resorts to hiring a bodyguard to protect him, develops special powers, or simply confronts the bully and deals with the consequences, in none of these movies do the adults EVER help the situation.  Apathy seems to be the most that we can muster, and that common theme clearly stems from a truth.  The adults are not dealing with bullying.  Surely there is a lot of discussion, and even a few laws, that have been created to deal with bullying, but what we really need to do is come up with some realistic, thoughtful strategies that kids can employ to empower themselves.

I wish I had a list of movies where the bullied turned to their parents and were provided useful strategies (other than violence) to stop the bullying, but alas, I do not know of any such movies.  I am not even sure that anyone has come up with good strategies for dealing with bullying, but by discussing it we might be able to brainstorm some initial techniques.  The most important thing is to get kids and parents talking about the issue, because most kids will hide the embarrassing truth of bullying from their parents.  It is up to us to dig down deep and find the truth.  Although none of the movies that I have listed offer helpful solutions to bullying, they do provide a great opportunity to get the discussion started, and in a subtle enough way that they won’t realize what is happening until they have already revealed information that they were keeping from us.

Society is making some progress in this area.  We have finally recognized that bullying is a problem, and not simply an issue of “boys being boys”.  By finally identifying it we are now capable of addressing it, and it is clear that people want bullying to stop.  The will is there, and all we need is a common direction to work towards.  So let’s continue the discussion and try out different solutions to see what works and what does not.

If you have any ideas on how to deal with bullying, please leave a comment.  I will respond.

26 thoughts on “A Timeline of Movies Dealing with Bullying”