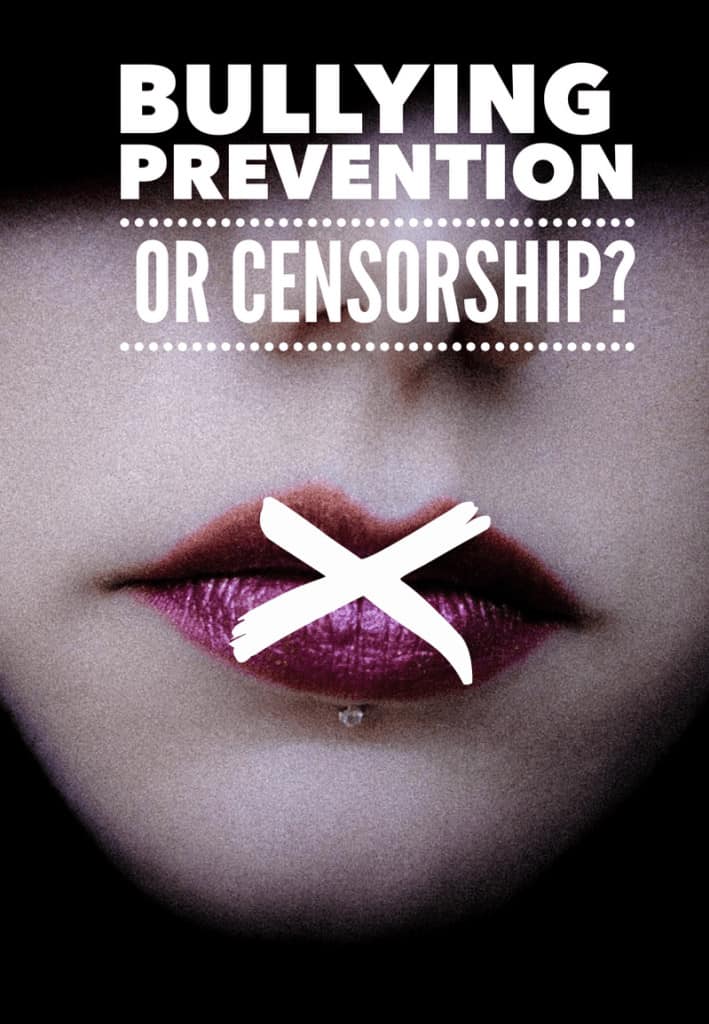 Michigan University is taking a lot of flak for their latest bullying prevention campaign, which encourages students to use “inclusive language” and think about how their words may affect others. While it sounds good on the surface, many are upset over the list of words that the campaign urges students to remove from their language. Some go so far as to call this bullying prevention tactic a step towards an Orwellian form of censorship.

First, this isn’t so much about the Michigan University campaign as it is about the idea behind it. If you want to learn more about that campaign, I suggest checking out the article from The Daily Orange. It seems pretty balanced.

Now, onto the meat of the campaign: encouraging students to drop certain words from their vocabulary that may offend others. Basically, the bullying prevention initiative calls on students to think about how certain words can really hurt other students. These words include truly tactless and hurtful terms like “retarded” and “that’s so gay,” along with eyebrow raisers like “that test raped me.” Huh? I didn’t even know that was a term.

Then there are terms like “I want to die,” as in “oh my gods, I can’t believe he saw me without my makeup on! I totally want to die!” These aren’t the only phrases or words on the list, but they give you an overall picture. Some are obviously hurtful. Some, you have to think about.

“I want to die” in on the list because it may hurt the feelings of someone who survived a suicide attempt. As that someone (I had a rough time during my teen years), I can honestly say I wouldn’t think that you were mocking me or not considering my feelings if you uttered those words in embarrassment. I’d just think you were melodramatic.

The debate rages over whether the Inclusive Language Campaign is simply a way to help prevent bullying or an infringement on freedom of speech. They’re not punishing students who don’t exclude their suggested words or praising those who do with better grades. It’s primarily a poster-driven campaign. A little on the Orwellian side, yes. So far, though, it’s not a regulation, just a suggestion. So technically, it’s not yet crossing the line into censorship.

My biggest issue with the campaign is that I just don’t think it’s going to be all that effective, especially in a college setting. I can see something like this working better in an elementary school, although maybe not with those exact words! In a high school or college setting, though, it quickly becomes a joke. Or worse. Plus, the University of Michigan Inclusive Language Campaign is geared towards simply wiping out words, not intentions. Intentions hurt far more than someone’s ignorant use of an outdated or offensive word.

Honestly, the money they spent on this campaign (and based on internet chatter, it was a lot), could have been better spent on creating more multicultural activities or other opportunities for students of different backgrounds to get to know each other. That’s really the only way to bring people together and get them to really think about the feelings of others.

As for when bullying prevention crosses the line into censorship, I strongly believe that everyone has a right to freedom of speech, even if what they say offends me. If your right to say horrible things is taken from you, that’s censorship. However, when those horrible words cross the line into harassment, slander or threats, you are no longer protected and all bets are off. Bullying prevention should focus on protecting kids (and adults) against those types of speech. As for those who do feel the U of M campaign is crossing the line into censorship, I can point out dozens (hundreds, perhaps) of other actual government-sanctioned forms of censorship happening around the world against which our time would be better spent fighting.

What do you think? At what point does bullying prevention cross the line into censorship? At what point should we start to be concerned? Feel free to tell me I’m wrong in the comments if you disagree! Respectfully, of course, this is a family site!

18 thoughts on “When Does Bullying Prevention Cross the Line into Censorship?”