What can lead to bullying? While many factors come into play, these six definitely top the list! Check them out and help stop bullying! 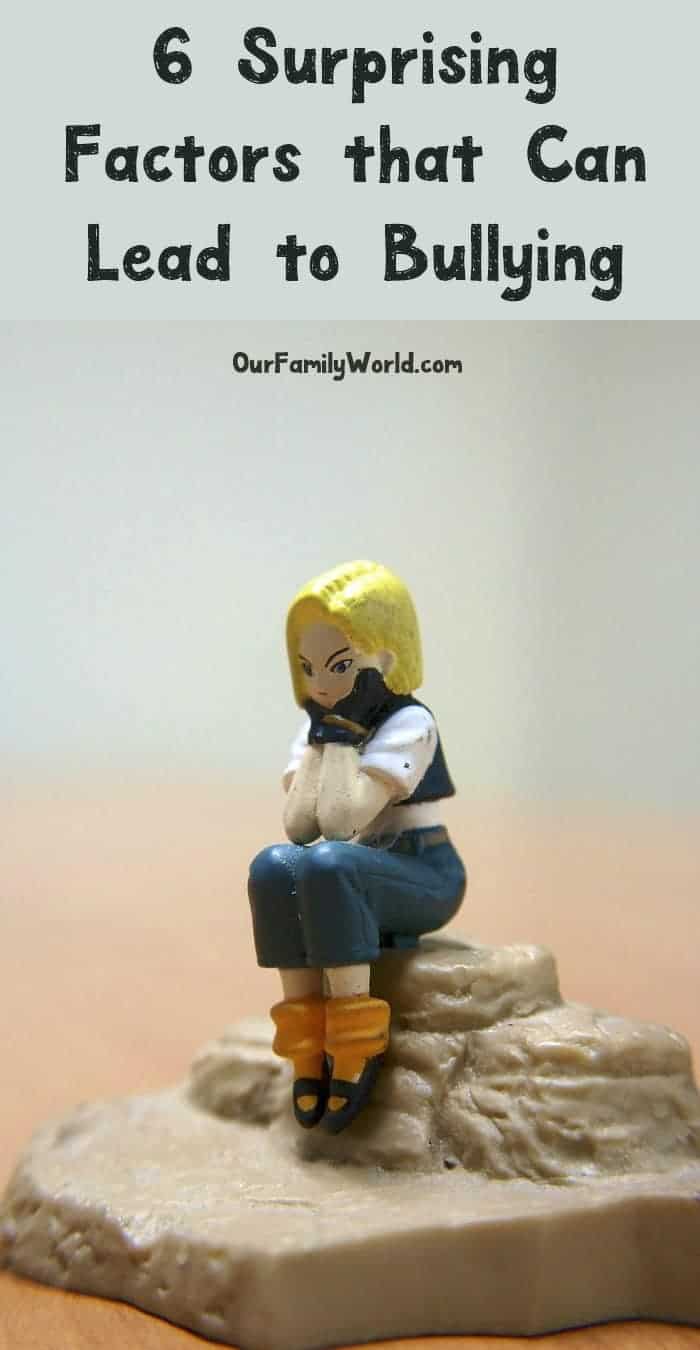 We’re quick to assume that bad parenting=bullies, but that’s not always the case. Other factors can play a part in an otherwise happy, sweet, child that may lead to bullying as they get to be school age and beyond. We’ve put together six factors and behaviors that could possibly lead to your child being a bully and even why some children turn to being a bully, some might surprise you.

Factors that Can Lead to Bullying

The quest to be “popular” can cause kids to do some pretty rotten things, including picking on other children who aren’t considered part of the “in” crowd. Ironically, studies have shown that being popular doesn’t make you immune to bullying, either.  Live Science published a great article that delves into the heart of the problem: competition for status. Those climbing the social ladder often feel like they have two options: step on those below or take down those above.

Some experts believe that bullies come from dysfunctional families. FYI, a “dysfunctional family” has nothing to do with who makes up the family so much as how the members treat each other.  In this sense, they are talking about families that do not show much affection, empathy, or love for each other. All families go through periods of dysfunction, but it’s the ability to get back to normal that really impacts our kids. Witnessing an epic fight between two otherwise consistently loving parents won’t send a kid spiraling down the path of bullying. Witnessing aggression and anger on a daily basis, though, can definitely alter a child’s moral compass.

There are times when kid will feel powerless in their own lives, and decide that bullying will give them the control they need and yearn for. There are many reasons they might feel powerless: divorce at home, adults arguing at home, being unable to do more, not getting what they want, and more. Suddenly they realize that having power over another human being that is different than them, will make them feel better about their lives. In other words, insecurity can lead to bullying.

Too often, victims of bullies turn to bullying themselves, often without even realizing it at first. It may start out as retaliation or self-preservation. Joe says something nasty to Carl, so Carl retorts with something even nastier. Joe backs off, and Carl realizes that he’s found the key to getting Joe to leave him alone. Is Carl bullying Joe or just fighting back? While that’s a debate for another day, take it a step further. After years of torment, Carl feels powerful, taking down Joe with a few sharp words. He decides to preemptively strike out against others that he views as a potential threat. Without meaning to, without even realizing it, Carl becomes a bully himself.

For some bullies, it’s all about the attention. Have you ever heard the saying “no such thing as bad publicity?” For some kids, there’s no such thing as “bad attention.” Often, these kids are neglected at home, either physically or psychologically (or both). They get the attention they so desperately need any way they can. When half of your class is terrified of you, they definitely notice when you’re in the room.

Other kids may get plenty of attention at home but still crave it even more. While most psychologists are apprehensive about diagnosing Narcissistic Personality Disorder before age 18, signs of the disorder can pop up much earlier. People with this disorder not only have a burning need to be the center of attention, they feel like they deserve all eyes on them…always. They also feel like they are “better” than everyone around them. Smarter, more physically attractive, more deserving of the attention. To them, belittling others is their right.

For some kids, the “rewards” of bullying are enough to make them keep doing it. The stereotype of bullies beating kids up for their lunch money comes to mind. We see this type of bullying continue well into adult years. Gang members who offer “protection” for a price (when they’re really offering protection from themselves), crooked authority figures who demand bribes, and people who resort to extortion to get what they want are all prime examples of bullies getting rewarded.

There is a broad spectrum of reasons or behaviors that can lead to bullying, but just about all of them lead back to one or more of these six causes. Fortunately, they are many resources available for kids to get help with being bullied and raising awareness of the problem.

Do you have any thoughts on what factors can lead to bullying? Share them below!

23 thoughts on “6 Surprising Factors that Can Lead to Bullying”