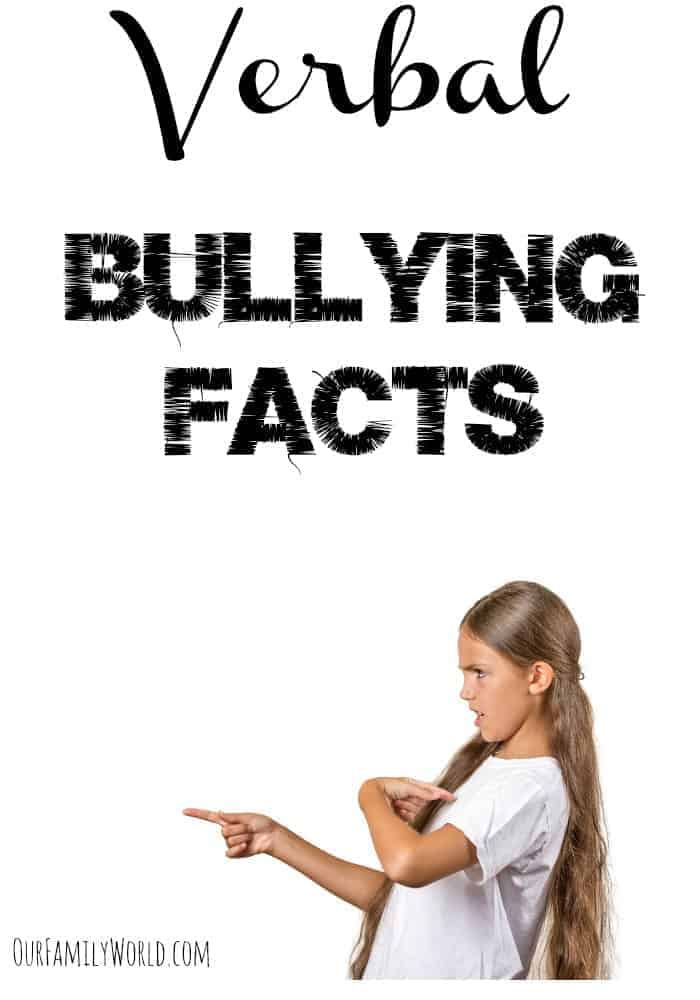 As bullying takes different forms, these verbal bullying facts are going to shed some light on areas you may need to teach your children to be more alert about bullies.  Bullying is no longer about the big kid beating up the younger or smaller kid for lunch money. Verbal bullying has taken on a much larger role in our kids lives in the last few years.

As cyberbullying is a form of verbal bullying, the addition of smartphones, social media and kids forums have created a playground for bullies to attack other children in.  Fight against bullying by teaching your kids these verbal bullying facts so they can be mindful of how their words hurt others.

Related:Anti-Bullying Facts to Help Your Mission to Stop Bullying

Verbal bullying comes in multiple forms including cyberbullying.  From simple derogatory comments, to cyberbullying and incidents where rumors are spread about another individual, verbal bullying happens in many ways.  Many people want to categorize verbal or emotional bullying as teasing, but this most often not the case.  Bullying escalates in nature, is deeply personal and meant to hurt the other person.  This can be name calling, verbally making fun of ones appearance or sexual preferences, spreading lies and rumors among a peer group, or attacking on social media.

Verbal bullying leads to higher suicide rates.  Verbal bullying breaks down ones ego and self-confidence.  The lack of confidence often leads to severe depression which in turn can lead to a much higher suicide rate for teens and young adults.  The inability to cope after being mentally and emotionally beaten down often leaves a victim feeling helpless and unable to cope.  Suicide is a real issue with those who are victims of bullying, with higher percentages in those who are bullied verbally and emotionally versus physically.

Verbal bullying is most often targeted at race, appearance or religion.  Three things that our children shouldn’t have to be worried about are often the most commonly bullied over.  Not only is verbal bullying an issue, it is directly an issue more significantly in regards to ethnicity and race or religious choices.  Physical appearance and ability or among the larger ranking of items to be bullied over.  As children grow into adults and find their own way, it is difficult to navigate without becoming a victim of bullying due to things you choose (like religion), as well as things you have no power over (race and sexuality).  Our children cope with direct verbal attacks on who they are more regularly than they are physically injured by a bully.

The side effects of verbal bullying are rampant.  It is time to stand up and fight with our children to educate everyone on how deep bullying goes in our schools and communities.