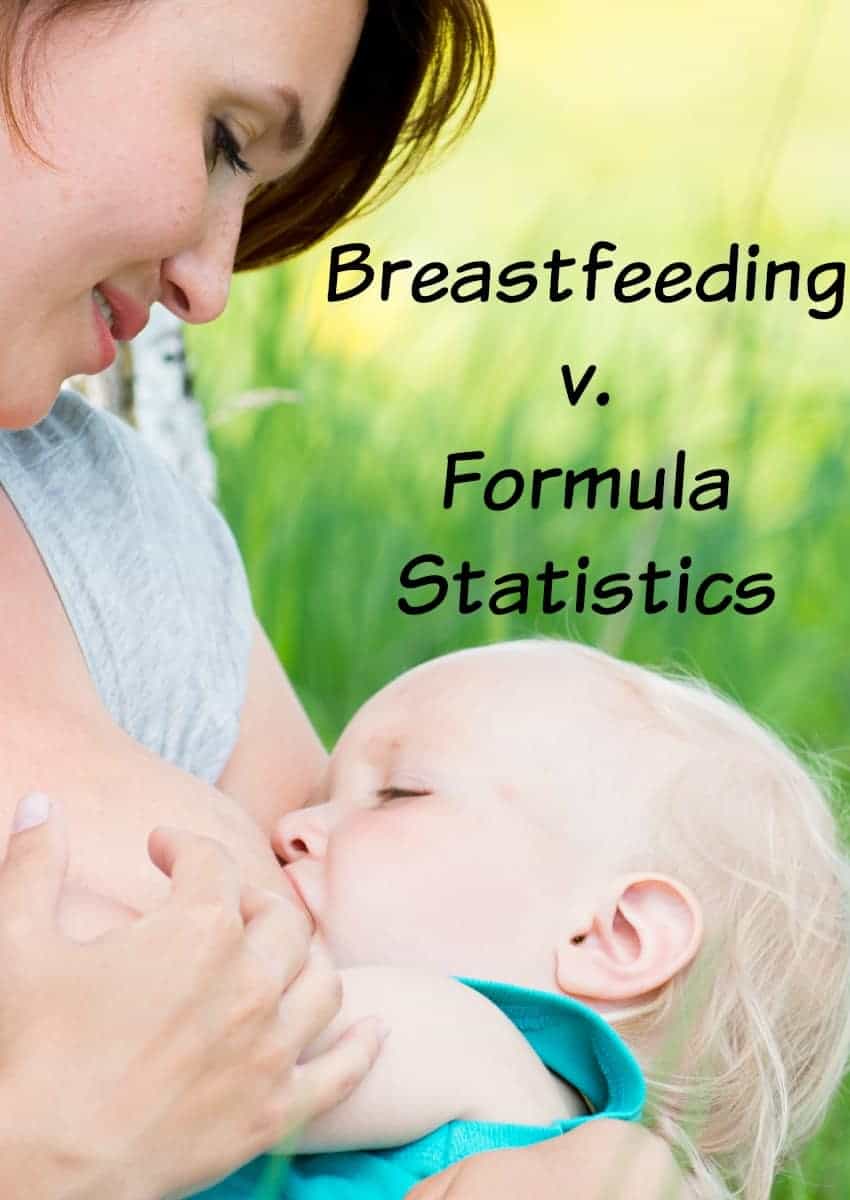 The ultimate question when you are pregnant (aside from ‘What are you having?’) is ‘are you going to breastfeed or use formula?’  There are so many statistics flying around when it comes to breastfeeding v. formula feeding.  When you’re making your decision, it’s important to look at the big picture and really digest all the information before deciding what’s right for you and your baby. Let’s check out some of these breastfeeding v. formula statistics and information for consideration.

*Disclaimer: The information in this post is an overview, not an exhaustive look at breastfeeding v. formula statistics. The opinions following the statistics are my thoughts and personal experiences, and are not meant as medical advice.

Breastfeeding by the Numbers

First, let’s take a look at the breastfeeding statistics by the numbers, then we’ll break it down a bit. Keep in mind that official statistics aren’t typically updated yearly, so these stats may differ from day to day!

How do things like income and age affect breastfeeding statistics?

The American Academy of Pediatrics (AAP) recommends babies be exclusively breastfed for the first 6 months.  While the CDC reports that more moms are breastfeeding now than in past years , we saw that less than 50% of babies are exclusively breastfed until 6 months of age?  After the first 6 months, the AAP encourages you breastfeed your baby until at least 12 months.

I found this statistic startling: 800,000 children’s lives would be saved every year because of the benefits of breast milk if they were to be breastfed within an hour of being born, only fed breast milk for the first 6 months of life and then continued until they hit the age of 2.

Did you know that according to the World Health Organization, the 2 main infant illnesses around the world is diarrhea and pneumonia?  Breast milk contains antibodies that help to avoid both of these in your infant.

Breastfeeding helps to fight infections and aids in preventing allergies.  My daughter has a lot of allergies, and then her asthma is triggered.  I am not saying that is because I wasn’t able to breastfeed her for more than 2 weeks, but statistics show that breastfed babies have a lower chance of having allergies.  Breast milk also helps to fight off a number of different chronic illnesses as well.

If you are unable to for  medical reasons, or just don’t want to (and that is ok!) formula is the next best thing.  Don’t let anyone scare you away from feeding your baby the best way you can or make you feel guilty.  I tried to breastfeed my first child, we lasted 2 weeks before I had to make the decision to stop, and we were both happier for it.  I had every intention of breastfeeding my second, and before we left the hospital, it just wasn’t working out for us.  Could I have kept trying, and cried and struggled and been miserable in addition to being a mom at home with a new baby and a 6 year old?  Yes, but I chose not to.  Breastfeeding comes easy to some, but many moms do face breastfeeding challenges.  Do not feel discouraged if you make the decision to switch to formula.  However, that being said there are some concerns with formula feeding.

Formula can, but breast milk can not.  You do lose a few things when you decide to formula feed, such as antibodies that are found in breast milk.  These antibodies are added protein that help your baby to be protected against infection and illness.  There is something magical about breast milk, it changes as the babies needs change.  Formula can not do that.  No manufactured formula can duplicate what the human body produces.

Water is not always safe to drink, especially is some other places around the world, or even in your own backyard.  You could make your baby very sick if you use contaminated water. According to the National Resources Defense Council, several cities in the US- including Fresno, Boston, and Phoenix- have poor drinking water.

Another issue with formula feeding is the cost.  Formula is not cheap. The Baby Center Cost Calculator seems to be the most unbiased calculator when it comes to determining the actual cost of baby formula. They put it at about $100 a month. Low-income families qualify for WIC.  which helps with some of the costs.

There are people who try to ‘stretch’ the formula and make it last by diluting it with water.  Lots of problems arise when you start to dilute a baby’s formula.  Malnutrition is a huge issue in other parts of the world, but don’t think it is not an issue here as well.  When you breastfeed, all the nutrients needed are coming from you, and there is no water involved, eliminating possible dilution and malnutrition.
The choice is yours, and only yours.  There will be many people who want to sway you one way or the other.  Of course ‘the breast is best’, but is it the best for both of you?

What did you choose to do when you had your babies?  If you breastfed, for how long?  What were some of your struggles both with breastfeeding and formula feeding?  Share with us in the comments below, as moms, we need to help each other out!