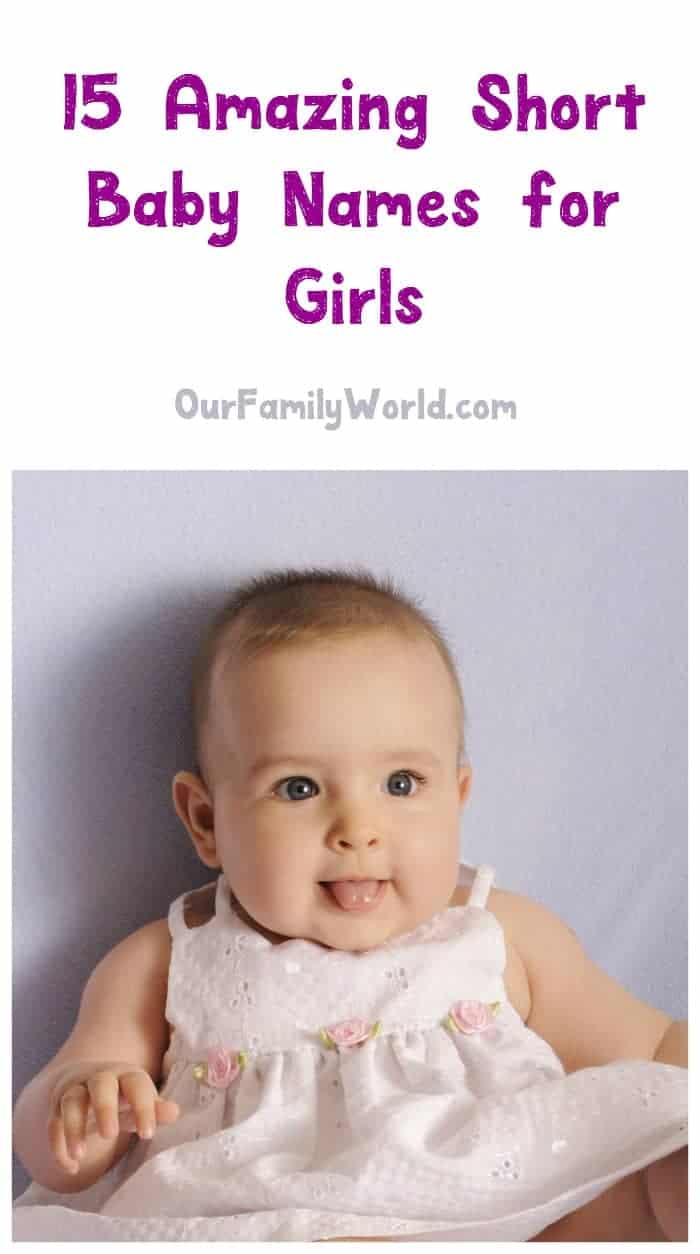 Picking out baby names is one of the most exciting, fun yet sometimes exhausting parts of having a new baby! With so many names to choose from, it can be hard to decide on just one. Do you go with something trendy, like an Irish or French baby name, or something more traditional? Modern or classical? Regular or unique spelling? The possibilities are endless! If you’re thinking short and sweet, though, we can help you out a bit there! Check out 15 adorable short baby names for girls!

1. Adele. This name has grown in popularity due to the singer, but the name itself has been around for a long time! Adele is of Germanic origin and means kind, tender and noble.

2. Ava. Though one of the shortest names you’ll find, Ava is a beautiful name and has a lot of meaning. The name is a variation of Eve and can be related to birds of even life.

3. Belle. Belle is typically used as a nickname for longer names such as Isabella, but on its own, Belle is a lovely name. The name means beautiful woman or girl.

4. Chloe. Chloe is a very popular name that has Greek origin. While the name is pretty simple, it has a very cool meaning. Chloe means green shoot, which refers to plants blooming and growing.

5. Cora. Cora is such as a beautiful name that relates back to Greek gods. Zeus’ daughter was named Cora and she was the goddess of fertility and the underworld. Recently the name has been used in several popular television shows.

6. Ella. Ella is an old German name that means “other.” The name has become very popular recently and is truly a lovely name for a little girl.

7. Emma. If you’re looking for a classic name, Emma is a great choice. The name derives from Germanic names and means “universal” or “whole.”

8. Grace. The name Grace is a true classic name that means goodness and generosity. The name has several ties to God and is truly timeless.

9. Kai. Kai is not a name you see very often but it’s meaning has roots in Welsh, Hawaiian and Japanese cultures. The name means ocean or from the sea. In Welsh culture, it means the “keeper of the keys.”

10. Lily. Lily is one of the cutest and sweetest names we’ve ever heard. Though the name is most associated with the lily flower, the name also signifies pure, innocent and beauty.

11. Mae. Mae is another three-letter name that has plenty of history and meaning. The name has French roots and comes from Roman mythology Maia, who was the goddess of spring growth.

12. Malia. Malia is a name that might sound familiar as it is one President Obama’s daughter’s names. The name means calm and has Hawaiian and Polynesian roots.

13. Opal. Opal is a gemstone known for its milky yet shimmering color. Opal is the birthstone of October babies so if you’re expecting that month, this name is perfect!

14. Sia. Sia has gained popularity from the Australian singer Sia. The name has Arabic and Hebrew origins and means helper.

15. Zoe. Not many names begin with the letter Z. Zoe is a cute name that has been widely used since the 1880s. The name means life and is perfect for a new baby girl.

What are your favorite short baby names for girls? Do you have a daughter with a short yet lovely name? Are you expecting a baby girl soon? If so, what do you plan on naming her? Let us know in the comments!